What if North opens on minimum points and it is South who has all the power? So far we have covered normal responses to opening bids. 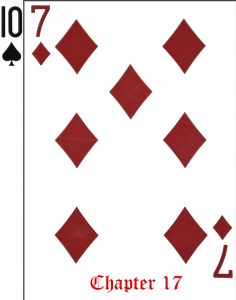 When North opens one of a suit to show 13-19 points, we have described most of South’s responses based on modest point counts. With opener holding stronger hands, again South has been typecast in playing a supportive role.

But now what if the tables were turned?

In each of the examples in this chapter, North will open one of a suit with less than 16 points; or he will open 1NT to show a balanced hand and just 12-14 points.

So let’s see how South, holding the far stronger hand, should respond.

Response to one of a suit opener

North opens one of a suit to show 13-19 points, a four-card suit, and promising a rebid.

South holds a good hand with 13-15 points and at least four-card trump support. With no other biddable suit, South will raise straight to Game:

This is a shut-out bid, and North will pass.

With less than four hearts and a biddable suit, South may consider Swiss. The Swiss Convention, you will remember, is a bid of 4♦s or 4♣s in response to an opening bid of one in a major suit. See Conventions to suit opener. It shows a balanced hand with 13-15 points. It has nothing to do with his diamond or club holdings, but a convention to inform partner how many aces he holds:

In order to show 16+ points, South needs to Jump shift, that is, bid in a new suit at one level more than necessary. He may still have four-card trump support, but he must show his strength first by bidding in a new suit, as in both these examples:

In either case the bid is forcing to Game. Even if North is on minimum (13 points), South’s 16 points gives the partnership a total of 29, enough for Game in any contract: majors, minors or no trumps.

Distribution is important here because with good shape, even with 13-14 honour points, South might want to jump shift anyway.

Note that a jump shift by a passed hand would indicate a fit (not necessarily a 4-card fit with opener’s suit) and about 11 honour points with a 5-carder. In this case North must also rebid.

Following the jump shift the partnership will try for a slam if North has 17+ points. Otherwise they will settle for Game:

In the above sequence, North’s rebid shows 13-16 points and a five-carder. He is likely to hold no more than three ♠s. Based on his distribution South will take the partnership to Game in one of the majors. South requires support for partner’s hand and a strong side suit to bid 4♥s, otherwise he may be single suited with outside strength where he can see Game in his own suit and bid 4♠s.

Note that with 16+ points and sufficient trump support South could still raise direct to Game: 1♥ – 4♥, as a sign-off, failing other options.

A double or triple jump shift by South, that is, two or three more than necessary in a new suit shows the same values as non-vulnerable three or four opening bids.

Back to Top
To continue reading go to: No trump and takeout response
Further pages in this chapter are:
Blackwood
Other conventions
Overcalling with strength