The 5-suit is usually only used in the case of the minor suits. 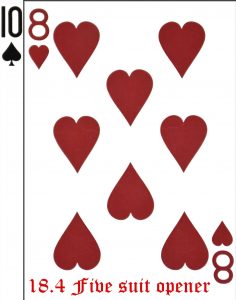 It is similar to the 3NT opening bid. But see the second example below. A 5♣ bid would show a 9-carder in ♣s and, say, 12 points and further that his minor suit is not solid. It is the minor equivalent of the 4-suit major opener. In the following example, North has eight diamonds and 8 points:

Note that the hand is just below the strength required for a 2♦ opener, which would have been preferred had the ♦Q been held instead of the ♦J and was facing a partner who had not yet passed.

Opening a major at the 5-level

The five-level major opener usually shows a nine-carder. This hand is almost a solid 11 tricks without support! Even so, North’s opening of 5♠ is a calculated risk. It is asking South to raise with one top honour or go for Grand Slam with both.

South would reply as follows:

Normally you would pass partner’s pre-emptive bid, unless you have support for partner’s suit or a very good hand (16+ points)

South’s double jump takeout response to North’s normal one of a suit opener shows 8–11 points and his long spade suit. If South had a stronger hand he would bid 2♠ in response to a 1♥ opener. This would show 16+ points and a signal for the partnership to investigate a fit for a contract at a suitable level. For example with this hand:

South has 19 points and a long spade suit.

If South had a better distribution of honours, but still 16+ points, he might jump straight to Game. He certainly would in any case if he had an 8-carder in spades. And the following hand might be a suitable candidate.


Back to Top
To continue reading go to: Defence to pre-empt