With a long suit, experts suggest you lead the fourth card from the top. 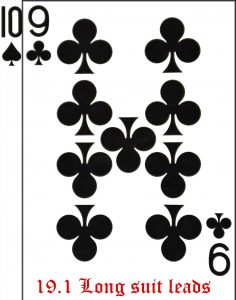 So what is the point of this “fourth card from the top”? It relates to the so-called “rule of eleven”. By leading 4th down of your own suit you will help partner to place the rest of the cards by deduction. Suppose you have ♠ Q 10 8 7 5, and you lead the ♠7. Partner can subtract your lead from 11 (11 – 7) to get 4, the number of cards outside your hand that would beat the ♠7 which, in this case, happens to be the ace, king, jack and 9. By looking at his own hand and dummy’s, partner will then have a pretty shrewd idea of what you’re holding. This is a useful piece of information if you are to attack the contract.

There are quite a few “ifs” and “buts” in all this. For one thing, the bidding prior to the play needs to be considered and, in particular, whether partner encouraged any interest in a suit by his bidding. I cover some of this in the example below.

It is not good practice to lead with a card below an ace, or an ace-king combination. So with ♥ A K 9 5, lead with the ace. Partner will lead back a low card so you can win a second trick with the king. Similarly lead the ace from a ♣ A 9 8 7 3 holding, as this may be the only chance you get to win a trick in that suit if opposition is sitting with a singleton.

Another bit of intelligence you get from the bidding is where dummy’s strength lies. Lead through strength is a good ploy, which you might consider as your final choice in deciding what to lead. If you can figure out declarer’s weakness (what suit did he not mention) you can also try leading to that suit. He will likely have to play high from dummy if he wishes to win the trick. Partner third in hand could take such a trick. Avoid leading opponent’s suit (that is, to his strength) unless in certain circumstances when leading a trump (see below).

Also avoid a lead in opponent’s second suit if he happened to mention one in the bidding.

The following guidelines for leading to a suit contract are not cast in stone but are a useful starting point:

Normally you lead the top of a sequence:

Note the last entry: 8 is top of the sequence 8-7. If you do hold an honour card outside of a sequence, then it is recommended to lead fourth from the top:

The rules for handling three-carders are the same as for no trump contracts, so see below.

Should you lead trumps?

It is almost always better to avoid leading trumps and reserve your holding for future ruffing opportunities. Quite often you can force opposition to draw trumps to stop you doing this. Every round costs them two trumps. It can be a good strategy if this exhausts trumps, as it will deny opponents any profitable opportunity for crossruffing. Study the dummy carefully for its balance between trumps held and short suits. Make sure you avoid giving the opposition a ruff and discard.

In any event, you should not lead from a short trump suit. If you have three or more worthless trumps, then it is a good idea to make the first lead from a short side suit instead, especially a singleton. This will set you up with ruffing values, as your partner will invariably lead that suit back to you.

You might, however, consider leading trumps if dummy agreed them during the bidding. You could lead from a K-Q or J-10, for example. Or lead from two or three worthless cards such as the 7 from J-8-7. This will sap opponent’s strength in trumps. This is especially worth a try if it allows you to establish a long suit. Free of trumps you might sneak in and get to run with it.

Back to Top
To continue reading go to: Leading to a NT contract