After any intervening bid the next player should revalue his hand. 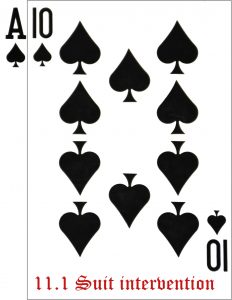 While normally he would respond with 6+ points some authorities suggest upping this to 8+ points following an intervention when bidding no trumps or a takeout. For a suit raise the 6-9 range should be safe.

Certain responses are also affected by an intervening bid by opponents. The No Trump quantitative bids in reply to no trump openers do not apply, and nor do most conventions. In fact, as far as I know, only the Swiss convention can still work after an intervention.

So in summary the following bid sequences are not affected by an intervention:

In the example below North opens with 1♥ and South, holding the following hand, plans to respond 2♣ to show 11 points. This response in a new suit at the two level shows a hand with a nominal point range of 9-15:

However, East bids 2♣ as an intervening bid:

So South’s response has been hijacked. What should he do? For a start South can increase the value of his clubs because his high cards come after East. East probably has the K♣ and J♣. Whichever card he plays South is able to take control. So with nothing worse than a doubleton South might bid no trumps. A 2NT response to any suit opener indicates 10-12 points and a balanced hand, even over a suit intervention. The only difference following the intervening suit bid is that South’s no trump bid must show stoppers in clubs.

With the next hand South bids 1NT in response to the heart opener indicating 6-9 points, a balanced hand and no biddable major. West opens for the opposition with a bid of 2♣s:

In this instance, the 2♣ call was made after South, and he should therefore devalue his ♣ suit because West plays after him. It is likely South’s Queen will be captured by West. On the other hand if South plays his Ace then West can duck and keep his high clubs for winning tricks later.

Intervening bids should make no difference to limit responses: that is, a suit raise, say, 1♠ to 2♠ or 3♠ would mean the same as any sequence without intervention.

Similarly No Trump limit responses indicate the same point counts as those without intervention but with that one important difference: a No Trump bid after a suit intervention must have a stop in the intervener’s suit. So in the following bidding sequence the 2NT shows 10-12 points, as if it were at one level more than necessary without the intervention. And, of course, it also shows a stop in ♥s:

In the next sequence the 3NT response shows 13-15 points and a stop in ♥s. If South does not have a stopper in ♥s then he must either raise partner’s suit or pass. Note that both of these No Trump replies infer a doubleton ♠:

A pre-emptive jump in a new suit also means the same unless the intervention was in the intended suit. In this case you would have to call “double”, to show strength in the suit bid by the opponents.

Most conventions, with the exception of the Swiss Convention, are either nullified or modified by intervention. Thus, in this next sequence the 2♣s response by South is not Stayman because of the intervening bid (the double):

An overcall of a conventional bid, however, only affects the bidding inasmuch as the opener is relieved of the obligation to reply. He is still allowed to reply, but he is no longer forced to. Here the 2♣ is genuine Stayman (there’s no intervening bid). But the 2♠ overcall from West relieves North from having to reply:

If you wish to make a double jump shift (that is, a new suit at one more level than necessary, say,  from the one to the three level) then you can still use it as a forcing bid:

Although the intervention in the next sequence cancels the fact that it is a double jump, it still forces because it has introduced a new suit at the 3-level:

In each of the above bids of 3♥s from South is forcing. In neither case did he have to jump to the three level; he did so deliberately as a forcing bid.

Finally, just one more option is the sputnik double.

The Sputnik Double is called in response to partner’s opening bid over an intervening bid. The call shows interest in the other two suits:

Partner opened 1♠ and overcaller bid 2♦. South’s double tells North that he is interested in ♥s and ♣s. He will have 6-15 points and a possible 4-4 holding in the unbid suits.

Back to Top
To continue reading go to: No trump intervention

By Nigel Benetton – based on the UK Acol Bridge Bidding System
Last updated: Thursday, 13 May 2021