Some hands don’t meet the job profile of a one no trump or one suit opener. They fall between the two options and leave the player with a bit of a dilemma. So what are we to make of these borderline cases? How do we handle them?

Where you are not sure whether to open with a suit or a 1NT, consider the following examples of balanced hands: 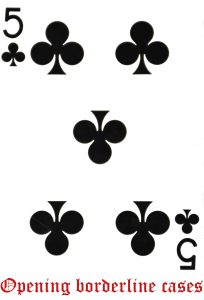 1] With the first hand North will open 1NT. Although the ♦ suit is biddable, and he has enough points to do so (13) it is certainly not rebiddable. Remember that a 5-carder must have a minimum of 3 HCP to be rebiddable. His diamonds are zilcho. Why open NT with two doubletons? It is a rare decision, to be sure, but with a blistering A-Q in both majors he can afford to misinform South.

2] In the next hand North opens a “prepared” 1♦ , hoping partner will respond in ♥s to clinch a good fit. If South bids 2♠, however, North will settle for 2NT as a sign off. North is too strong for a 1NT (12-14 points being the ticket) so he decides on the so-called “prepared bid”, which is explained below.

3] In the final example below, North also has 15 points and is too strong for a 1NT opener. His only 4-carder is too weak to bid and, besides there is no rebiddable suit. He opens with a prepared 1♣.  With an extra 2 points, say the Q♦ , he might have opened with his spade.

Prepared bids are not used by all players; it is a matter for partnership agreement. With a 15-point hand (possibly 16) which holds no biddable 4-carder you may bid a 3-card minor to a high honour (the prepared bid): 1♣/1♦ . If you have both, bid the ♣ in preference. Your rebid must be in NT unless partner bids a major and you can safely raise him. With 17 points you can bid a “pointless” 4-carder in view of strength.

The key reason for using prepared bids is when you are too strong to open 1NT (12-14) and have no biddable suit in the natural sense of the word. It is “prepared” because it keeps the bidding open for your second bid, which will be in NT at the next level to show 15-16 points.

1]  North has 15 points. It meets the balanced hand requirement for a 1NT opener but is too strong in points to do that (since we are playing weak NT).

North bids his strongest minor suit as a prepared bid. South bids 1♥ as his four-card suit. He has 6 – 15 points. North will raise to 2♥s. On minimal points South will Pass. If South had responded with 1♠ instead of 1♥, North might have bid 1NT since his partner had shown a stopper in ♠s. He will reckon North has 15 points. Unless he has 10 or more (enough for Game in a No Trump contract) South will Pass. Even with 10 points, South might raise to 2NT inviting North to decide whether he wants to go for it.

2] The next hand is also too strong for a No-trump opener, so North bids his best minor as a prepared bid.

South’s response of 2♣s shows 8-15 points, as required for a new suit at the two (next available) level. North now bids 2NT to show he has 15-16 points. South will calculate the combined points and consider his distribution. With a balanced hand and stoppers in the unbid suits he will need 10 points to raise to Game at 3NT. Otherwise he will Pass.

Note that to be biddable a 4-carder requires 3 HCP; a 5-carder none. Neither of North’s 4-carders are biddable as openers. 1NT would show 12-14, while he is not strong enough for a 2NT opener. Thus he takes the middle ground with this prepared  bid. Incidentally, a 5-carder requires 3 HCP to be rebiddable, while logically a 6-carder can be rebid without any  high card points.

Cross ruff. A cross ruff is where you trump one suit in your hand and another suit in your dummy. Defenders can get up to the same trick (pardon the pun) by cross ruffing each other’s voids.

Rule No 8 – A rebiddable suit must have at least five cards and 3 high card points.