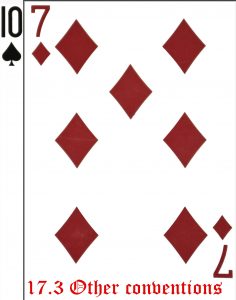 Roman Blackwood is an extension of Blackwood to convey additional information. Instead of the standard reply to the Blackwood 4NT asking for aces, it uses the so-called “Blue Team” responses to pinpoint which aces partner holds:

(PODI is similar, reversing the meaning of the double and pass calls, and this is a matter for partnership agreement).

Gerber is a bid of 4♣ in response to an opening bid of 1NT (or 2NT) and is asking for aces. North opens 1NT and South bids 4♣ indicating a powerful hand and an interest in going for a slam:

The replies from North are based on the Blackwood principal but at a lower level. South’s initial  4♣ response shows 13-20 points.

South can invoke Gerber, for example, on 13 points when holding an 8-card major; or on 21 points holding a 6-card minor. The convention may be extended to ask for kings by the 5♣ enquiry, as above. Some players agree for the King enquiry to be made with the next lowest available bid, as in this example:

South has 14 points and a powerful 8-card ♥ suit. He bids 4♣ to ask North for aces. As a rough rule of thumb South can bid Gerber with 13 points if he has a good 8-card major; but needs 21 points with a good six-card minor to do so.

Gerber is always a jump bid in response to a no trump opener. Even a response of 5♣ to an opening bid of 3NT would be Gerber. Interference is dealt with in the same way as with Blackwood.

Partners can mess up their communication if they confuse Blackwood and Gerber; Gerber and Swiss. And it is up to them to agree how they use any or all of these three conventions.

One suggestion is as follows:

This is not a perfect guide and experience will improve how these conventions are handled by the given partnership.  Of course, players are by no means required to use any of these conventions. It is strictly for partnership agreement. It is important, however, to know what the conventions mean as they will undoubtedly crop up when used by the opposition.

Just remember that Swiss is response to a suit opener; Gerber is a response to a no trump opener. Blackwood never faces an opening bid. It follows after a series of bidding when slam is definitely a prospect and the partnership wants to find the right fit.

Back to Top
To continue reading go to: Overcalling with strength