Defending against pre-emptive bids is quite challenging. 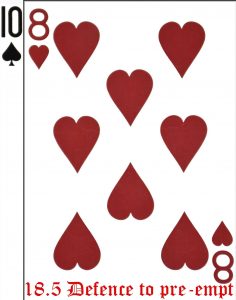 Without a squawk you are faced with the prospect of trying to start communicating with partner at the three-level, at the very least. Opposition will be ready to pounce with a timely double to leave you with an expensive failed contract.

The normal defence is:

Aside from this there are a number of conventions in Acol to help you navigate the dangerous waters of pre-emptive bids.

Fishbien is a useful convention in defence of a 3-suit opener. It is a bid in a new suit at the next available level and is asking partner to bid his longest suit. It should show 14+ points and an unbalanced distribution:

East’s 3♠ is a bid at the cheapest level. It says nothing about his spades. Fishbien usually shows a shortage in opponent’s suit—in this case hearts, as in the hand above. This stands to reason when you consider that a pre-emptive opening bid shows a 7- or 8-carder.

Note that Fishbien is always a direct overcall. Bid by West instead it would not be conventional.

Again, East’s overcall at the lowest level says nothing about his heart suit. He has a singleton! West will recognise Fishbien and assume his partner is weak in hearts. He will respond in spades or clubs. In either contract their trumps will have high ruffing values over opponent’s long suit. If West had a balanced hand, 11+ points and stoppers in hearts, he could well bid to Game at 3NT.

Lower available minor (LAM) is a bid over a 3-suit opener at the next available level: thus a bid of 3♦, 3♥, 3♠ or 4♣ depending. It requests a takeout by partner in his longest suit. With the right distribution it is better than Fishbien because it does not cut out natural three bids.

FILM is a combination of Fishbien and Lower Available Minor, which operates over each pre-emptive bid as follows:

An overcall of a pre-emptive opening bid in opponent’s suit shows a blockbuster of a hand, and usually a 6-5 two suiter. East converts West’s 4♥ call to 4♠, indicating he is 6-5 in the black suits:

In the next auction East converts to 4♥s to show he is 6-5 in the majors. West will either pass or go 4♠ as a preference bid.

The 4NT overcall of opener’s major 4♥ pre-emptive bid indicates a minor holding (otherwise he would have used 4♠ as his overcall):

The double over opener’s minor 4♣ means the same as a 4NT overcall but allows space to reach a major fit in Game if warranted:

Where he bids 4NT instead of a double overcall over the minor 4♣ pre-emptive opener, this is taken as a natural bid:

Remember that a 4-level major is Game; a 4-level minor is not. Bear this in mind when interpreting these three examples.

Pre-emptive bid. A pre-emptive bid is made at an unnecessarily high level. It deprives the opponents of bidding space, obstructing their attempts to find a contract.

Rule No 25 – Never rescue an opener’s pre-emptive bid. His opening bid invariably promises a minimum seven cards in the suit bid and that’s where the final contract should lead. You rarely have a case for outvoting him.