North, sufficiently chastised, will hopefully redeem himself in the third round. 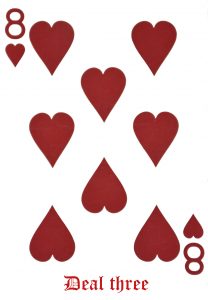 North-South still vulnerable, and it is North’s turn to open the bidding.

With 12 points and a balanced hand (he has stops in three of the suits) he is ideal for a 1NT opener, showing 12-14 points:

East has 9 points and passes. South has an unbalanced hand with two doubletons and must take partner out of a No Trump contract. As a rescue bid South would even bid 2♥ (at the next available level) with a 6-carder and hardly any points. As it is he has 14 points:

In the 12-15 point range in majors he can invite Game with a jump takeout. He bids 3♥. North with very good heart support raises to 4♥. The contract is agreed and with ♥s as trumps they have 10 of the thirteen cards between them.

As South is declarer, it is up to West to lead to the first trick. Since his partner passed he has little to go on. He decides on a ♣6, rather than his 2 as “slightly encouraging”. North spreads his hand out as dummy and leaves partner to count his winners. He might well say, “Thank you , partner.”

South can see six heart tricks. There are also two more from the Aces held between them, so he just needs to find two more to make the contract. South has all the top ♣s except the King. And from West’s ♣ lead it is a pretty good bet that’s where the King lies. North’s ♣Q is a possible trick if he can lead through West’s hand. And he may be able to establish his ♦K if opponent’s Ace can be drawn. So South needs to finesse twice. Given the distribution he decides not to draw trumps just yet, as there is a chance to set up one or two cross-ruffs. The strategy then is to hold on to trumps until the two extra tricks he needs are developed first.

Presumably West hoped his partner had the ♣A. Unfortunately for him he has the ♦A. South drops the ♣Q onto the first lead and sacrifices his ♣J. That was one finesse straight off the bat. South just needs to develop one more extra trick. He leads the ♦8 from dummy, assuming if East has any strength in his hand it has to be in ♦s. This is a good example of the principle that you lead through strength. East has both ♦A and ♦Q. He can see the Jack is on the table. The normal rule is for second player to play low. East plays ♦Q to the trick hoping the King is with partner. He is going to be disappointed. South takes the trick with ♦K. It’s a second finesse. South now decides to mop up the trumps. He leads first with the ♥A, and then the ♥Q. East’s ♥10 is forced out and West discards on this last round. South now has control. The opposition is unable to trump any tricks. He leads out the ♣A for another trick, leaving him with a void and the option to trump any further round of ♣s.

South now leads to the dummy’s Ace with his ♠4. Then leads out dummy’s ♣10, which he trumps from his own hand. He then voids his diamonds by leading to the next trick with the ♦7, knowing East will win with the ♦A. He will now lead a spade which West takes with his ♠K, and in turn leads back to East who takes the trick with his ♠Q. East now has the lead again. But whether it is a ♣ or a ♦ South will trump it with his ♥5. He then takes the last two tricks with Dummy’s ♥K and ♥J. The contract is secure, and the partnership wins the second Game for 120 points below the line and the Rubber.