In most cases the response to an overcall is not affected by an intervening bid. 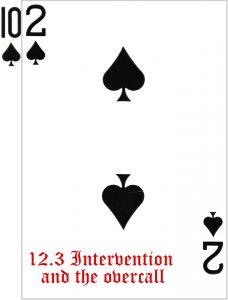 For a suit overcall over a suit opener, as shown in the following table, the responses by West to a suit overcall are the same whether South intervened or not. The only corollary concerns the no trump response by West. He needs stoppers in the opponent’s suit: that of North’s without intervention; that of South’s with intervention.

In responding to the overcall, distribution values become a more significant factor. Rescue bids against a no trump proposal by a partner with almost zero points are not uncommon. No trump contracts are suicidal with unbalanced hands. The responder to the overcall is more often than not already pushed to the two level, even the three level. But with a particularly unbalanced hand, six-carder or more, he may be better off launching a rescue bid than meekly responding no bid. Playing a 3♣ contract on marginal points with a combined holding of, say, eight clubs, will cost less in penalties than going down in a 2NT contract.

For example, you are sitting with just two honour points and an eight-carder headed by a lonely queen. You should not leave partner in a two, or even a one no trump contract. Much better to go down three in hearts than five or six in no trumps.

The affair is all a matter of probabilities, limiting your losers and, as important, depriving opposition of a juicy profitable contract.

Of course, if you can find a fit for you six- or seven-carder you and your partner could win at least a partial Game.

Personally, I only bother with a point count for distribution when I am stuck. For example, to open one of a suit you need 13-19 points. Those are high card points. So what do you do with an unbalanced hand on 12 points? You cannot open one no trump. Do you no bid because you have less than the opening requirement of 13 points?

If I had a good five-card major I would add a long suit count of one point for the 5th card. That gives me 13 points so I could still open one of a suit.

With no better than a 4-carder you are likely to be balanced enough for a one no trump opener anyway. With a minor 5-carder, however, and unbalanced, say 5-4-2-2, on 12 points I would no bid. Of course, distribution values are only relevant outside the realm of no trumps.

In summary, look for extra values when faced with borderline cases.

And that is precisely what you do when responding to partner’s overcall. With three-card or more support, go straight for the raise. In response to the overcall (with no more than nine points):

Note that in raising partner you can look for extra values through your short suit count. The more cards you hold of partner’s suit the fewer high card points you need. For example, with a 6-4-3-0 distribution you might have just one point for a Jack, say, but can still raise partner to the five level.

As mentioned several times length is strength. With long suit holdings, six-, seven- even an eight-carder response to the overcall can be very competitive and made on very low, even zero high card points. This is especially the case if opposition opened with a suit, which of course promises a rebid.

Back to Top
To continue reading go to: Overcall response revisited
By Nigel Benetton – based on the UK Acol Bridge Bidding System