While South deals out to the first round, his partner opposite shuffles the second pack. When done this is placed to his right next to West. 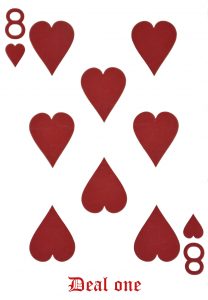 For the following deal West will offer the pack to South who will cut to him and West will deal to the second round—the one that is going to be a disaster. When West is dealing his partner in turn will shuffle the other pack, placing it to his right next to North who will deal to the third round.

We will play South for this deal. As dealer South will open the bidding.

South has 14 points. His hearts are biddable for one round only. He needs five hearts to rebid them. So what would he do next time round if he opened one of a suit? He promises a rebid, and his only option would be to bid 1NT (or NT at the next available level). He has nothing worse than a doubleton. In actual fact he has a very good balanced hand with a 4-4-3-2 shape. It is ideal for NT. So he opens the bidding with 1NT showing a balanced hand and 12-14 points.

The opposition has gone very quiet. North raises to 2NT showing 12-13 points. East passes. This is too easy. South sees a minimum combined count of 25. He goes to game at 3NT.

West leads to the first trick with the ♠4. He probably holds the Ace. It is a normal practice to lead out to a trick in a suit you favour. His partner East will no doubt lead back a spade if he gets the chance. We had better watch that. South has a ♠K and West will take the trick if we lead with the king. The tactic here would be for South to lead a ♠ through to his dummy and leave West to hold his Ace or play.

But we are getting ahead of ourseslves here. We first have to put dummy down on the table. You do this only after the opposition has led to the first trick.

North has 12 points, just inside the range. South now count his winners, and then will figure out how to make up any shortfall. There is the A♥, while clubs and diamonds will make another four. And if he plays his spades right, with a finesse, there are two more there. A finesse is to win a trick with a card that is not the highest available. Seven so far. So he needs to look for two more. In a No Trump contract it is usually a good idea to focus on a combined long suit. The longest is clubs with a combined eight cards. But he is already counting on his ♣A and ♣K, so there won’t be two more there, maybe one. The next longest is the seven hearts. And that is where he will develop his final trick.

West has led with the ♠4. South decides to play dummy’s ♠6 to develop that finesse. If East has the Jack he can trap it with King in hand. East plays ♠9 and South takes an easy trick with his ♠10. He is now pretty sure West is sitting with both the Ace and Jack of spades. South quickly cashes in his two heart tricks. He takes the second trick with the ♥K in his hand and leads out his ♥5 to dummy which takes the third trick with the ♥A. West dropped the ♥J to the third trick to force the Ace out. Two rounds of hearts leaves five cards left in that suit with just the Queen and ♥8 with opposition. South skilfully transfers the lead to dummy so that he can play his last ♥9. East discards a ♦, leaving West to hold the remaining hearts. South plays ♥6 knowing dummy’s 9 will force the Queen out from West.

West now leads with his ♠A and captures the remaining spade (♠Q) from dummy. West could lead with the ♠J, but he rightly guesses his partner does not have the King. East discarded a ♦ suggesting little interest in that suit. Looking to take control of the game, West tests East for some club strength. It is also a good idea to lead through a strong suit. So West leads to the next trick with ♣4. South wants the lead to make his last heart trick while he has the chance. He plays low in dummy. East plays a ♣Q and South beats that with ♣A to take the trick. He now leads with his master heart, ♥10, for another trick. Four more needed! And it is in the bag. He now has control of the other three suits. Before giving lead to dummy he leads out his ♠K and then ♦A for two tricks, then leads to dummy’s diamonds with his remaining ♦4.

Dummy takes the trick with ♦ K. South then leads ♣K from dummy to take trick number nine. Dummy leads out ♣6 and the trick is taken by East’s ♣J. He then leads his master ♠8 to win the last trick.
South makes his 3NT contract to win Game earning 100 points below the line. But he won’t be smiling for long. His partner is about to make a hash of the next round.

Back to Top
To continue reading go to: Deal two