Finding the synonym for the definition word is the same as a traditional crossword, only in this case you have the cryptic side of it to give you an added clue. 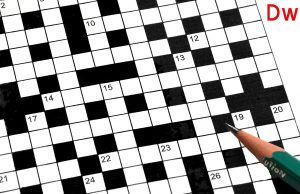 1] Supporters of Queen captured by revolutionary chiefs (12). ER for the queen is captured by CHE for the revolutionary Che Guevara. The italicised word is an “action word” instructing you to capture CHE with ER for “cheer”. Use LEADERS for chiefs to get the answer “Cheerleaders”.

2] Following spell inside, had a bite with daughter over (10). Use TERM for spell, IN for inside, ATE for had a bite, and D for daughter. The answer is “terminated”.

The main exception to this is the so-called “double definition”. This is where the clue contains two phrases or words that mean the same thing, but not in a straightforward way. There is a separate page on this topic.

The definition phrase is “viewer’s complaint”, which immediately makes you think of, say, a television viewer complaining about a programme or advertisement. When I tell you the answer is “near sightedness” you will appreciate how misleading the clue was. So use NEAR for local. Then SIGHTED for spotted, and finally NESS for head (a headland or projecting coastline).

In this clue the two words “web” and “compiler” might mislead you into thinking of computers, the internet and programming. When you come across the word “compiler”, by the way,  (or “setter” for that matter), in cryptic speak it often refers to the person who is setting the crossword. So use ME for compiler (as in “me, I am setting the clue”). And use SH for mum. No, not mother, but SH as in keep quiet. The answer is “mesh.”

There are rare exceptions. For example, when you come across “Yes” at the end of a clue it means that the definition word is also used in the cryptic hint of the clue. For example:

The definition word is “fool”. But “fool” is also part of the cryptic clue, indicated by “yes”. So you take N from name, use I for one, and TWIT for fool. The answer is “nitwit”.