To start the bidding at the one level you have the following options: 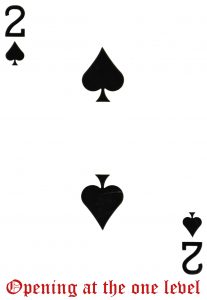 The exception to this is when playing fourth-in-hand and the first three players have all passed. The fourth player will need 16+ points to open, not 13. This is because he cannot rely on his partner to respond and he may be left on his own with his solitary promise. He needs to make sure he can work the round on his own.

Note that if a player, who has previously passed, opens the bidding he is showing, by inference, a maximum point count of 11. In response to this weak opener you will require the following:

There are special cases where you can open the bidding with less than 12 points and a very unbalanced hand—discussed later.

You require 9-11 points and two 5-carders or one 6-carder. The hand must be rebiddable if opening in first in hand or second in hand. And note that for two 5-carders to be rebiddable they should be touching, or black. It is a sign off if opener rebids his suit at the next level. The following is a typical hand for an Acol Light Opener: open 1♠ with a 6-carder and 9 points:

South’s response shows four cards in diamonds and a minimum of 10 points. It also shows he does not have spade support. North’s rebid of 2♠ tells South his spades are certainly a 5-carder; it could be a 6-carder if North had bid the Acol Light Opener. But North cannot expect more than three spades in his partner’s hand. Given the chances of distribution with North having six spades his partner probably has no more than one or two spades. He may even have a void. North will likely Pass and play the contract in 2♠s.

Here is another Acol Light Opener candidate, this time a hand with two 5-carders and 10 points:

North opens 1♠ and again rebids 2♠ as a sign off, following South’s limited response.

Limit bid. A limit bid conveys limited strength to partner. They include a single raise in partner’s suit, and the NT responses. They are not forcing, and opener may pass if he wishes.

Sign off. A sign off is a bid that asks partner to stop bidding. Repeating a suit three times by the partnership in sequence is very definitely a sign off.

Rule No 2 – a suit opener promises a rebid.