There are a host of Acol bidding conventions facing the No Trump opener. 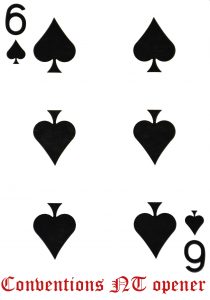 They all seek to achieve the best fit between partners, bearing in mind the dangers of an unbalanced hand in a No Trump contract.

An opening bid of 1NT promises 12-14 points; an opening bid of 2NTs promises 20-22 points; and both mean a balanced hand. The opening NT bid is very descriptive. Responder will first see if he has a balanced hand, with no biddable suit and sufficient points to support partner. Otherwise alarm bells will start ringing and he will send signals, first looking for a major fit and if not, then a minor fit. If unsuccessful the partnership might still end up in No Trumps provided stoppers in all suits can be found.

Although a No Trump contract is the cheapest way to reach Game (you only need 3NT) it is foolish to insist if the fit between partners is going against the grain. With at least one long suit lurking about it is invariably safer to settle for a suit contract, even if the partnership has to fall short of a Game bid.

Probably the most popular convention in the anti-No Trump armoury is Stayman. It will come up very often in play because it handles the most common types of hands and works at the lowly two-level.

More exotic and slam going conventions are left for Chapter seven. For now we will just cover the Stayman convention.

Stayman is a response of 2♣ to opener’s 1NT. It generally shows a 5-4 holding in the major suits with 7-14 HCP (nominally 11 points). The bid is asking partner to bid a 4-card major if he holds one, and to bid in ascending order if he holds two. The intention is to place the partnership in a 4-4 suit fit in preference to a NT contract. This will usually produce one more trick than is possible in NT for a superior match point score.

Note that if there is an intervening bid, even a double, then responder bids naturally. In this case, even a 2♣ response is not Stayman, but a weak takeout. If responder wants to bid 2♣ Stayman but he can’t because of the opposition’s intervening bid he has to take an alternative strategy. This is what he has to do:

A “cue bid” is a bid in a suit to indicate to partner that he has control of that suit.

Note that with nothing worse than a doubleton responder will rarely use Stayman.

Extended Stayman is a bid of 3♦ in response to opener’s 2♦ negative bid and is asking for a 3-card major.

However, the Weissberger convention is preferred, and this we talk about in the next Chapter.

Cue bid. A cue bid is made in a new suit. It shows first round control (an Ace or a void in that suit). To be legitimate the trump suit must have already been agreed upon or clearly inferred by the bidding.

Rule No 9 – You must rescue your partner out of a no trump contract if you have a long suit. Even if you have less than 11 points you must bid your suit.

Rule No 10 – In a No Trump contract the partnership must ensure a guard in all suits.

Back to Top
To continue reading go to the last section in this chapter at: Stayman convention