Several important conventions seek to avoid a no trump contract. 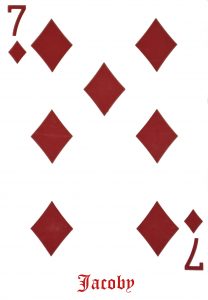 They are launched by responders with unbalanced hands, and include: Stayman, Jacoby, Texas, Smolen, Weissberger and Sharples.

We start with Jacoby, followed by some detailed examples of the convention at work, and finally a brief mention of Extended Jacoby.

Jacoby is a bid of 2♦ s or 2♥s in response to a 1NT opener. Jacoby shows that responder holds a 5-card major with at least 12 points:

The purpose of the transfer bid is to make opener the declarer in a suit so that the partnership can keep its strong hand undisclosed. This is most useful when playing the strong NT style (opener with 15-16 points), as would be the case anyway when bidding 1NT in the overcall position. However, for weak NT players it still has its value, because for tactical reasons it is often a good move to keep any No Trump hand hidden.

Aside from this the transfer bid makes the lead come up to rather than through the opener’s suit. Any bid by South following an intervention (by East) is taken as a natural bid, and Jacoby cannot be invoked. By the same token if, after responder’s Jacoby, the opponents double, North must have a minimum 3-card suit to accept the transfer.

As requested North bids 2♥s on his rebid. For his part South’s second response will depend on his points:

With 14-18 points South jumps direct to Game in the next sequence, bidding 4♥s. This promises his ♥s are a 6-carder, and his preferred major.

Alternatively South may wish to show a new suit, say ♦ s. In the next example below the 3♦s is a natural bid. This second  bid is forcing to Game and leaves North to choose. He can go straight to Game in the new suit if he has sufficient support for ♦s, bearing in mind it will be at the lofty level of 5. North will need the maximum 14 points plus one or more for distribution. A cheaper Game would be 4♥s if he is confident of a fit with the original suit requested by South. North could agree to this with his minimum points promised (12). Not finding a suit fit he goes back to plan A, and bids Game in 3NT:

In the next sequence below, North decides to stop short of Game and leave it to South to make the final move. South starts with the transfer request and North obliges with a rebid of 2♠s. South shows he has another biddable suit by bidding ♣s. North’s return to spades suggests he only has a doubleton in ♣s. Remember his original opening bid of 1NT promised a balanced hand and nothing worse than a doubleton, which in this case must be ♣s. He is not allowed to hold a singleton, and he can’t have three clubs otherwise he would have supported South. Repeating his spades suggests North has four of them in a shape of 4-4-3-2. With a 5-3-3-2 shape (though less likely), North might have opened one of a suit with a 5-card major. He didn’t. True, with this shape, he might have a five-card minor, but then he would only have three spades. The bet is he is 4-4-3-2 with a 4-carder spade suit. Such is the intelligence gathered in a series of bids! South will either bid game in 3NT or, if he has a strong 6-carder in spades he will raise North to 4♠s:

In the following exchange North is on maximum points of 14, as shown by his jump bid to 3♠s to invite Game with a good spade fit:

In this next sequence below, North (on a minimum 12 points) merely responds as requested with 2♠ at the next level. But in this case it is South who jump bids to 4♠s to show 18+ points and good distribution, such as a 7-carder.

The partnership has a minimum of 30 combined points. They are really close to the points needed for a slam. In Jacoby, note that a slam try is confirmed by a jump raise of opener’s suit direct to Game:

The final example shows three possible rebids by South in response to North’s 2♥s and what they mean:

Examples of a few hands

South has 9-11 points and the partnership will stop below Game:

South has 12-13 points and invites North to go to Game if he has maximum points (14). With only one doubleton, South might have bid 2NT instead of 3♥s to show a balanced hand:

With 14-18 points South will force his partner to Game in the next two examples. South is responding in a suit takeout so he can count for length. He has 12 HCP plus 2 points for distribution. His 6-carder puts him way out of the NT balanced type of contract. He goes straight to Game in spades:

South has 13 HCP plus one more for distribution (remember the long suit count of one point per card held over four):

Being a new suit the 3♣s by South is forcing to Game. It shows 5♠s and 5♣s. Why is this? South’s first response of 2♥s is the Jacoby transfer asking North to bid spades. It shows South has five or six cards in ♠s. His follow up bid of 3♣s is a natural bid (not Extended Jacoby) showing a second biddable suit and that it is a five-carder. He did not repeat ♠s so that too must be a five-carder.

In response North indicates he has no support for South’s ♣s, but bids below Game with 3♠s. So responder bails and bids 3NT. Had South been less balanced, say with 6♠s instead of five, he might well have gone to Game in that suit, raising North’s 3♠s (as in example three above).

Extended Jacoby is a bid of 2♠ or 3♣ and shows intermediate strength of 9-11 points and interest in a five or six-carder minor suit:

Like all conventions, Extended Jacoby is by agreement between partners.

Back to Top
To continue reading go to: Texas