A no trump response to a suit opener shows 13-15 points.

No trump response to a suit opener

With a balanced hand South will still respond with a jump shift if he has 16+ points. 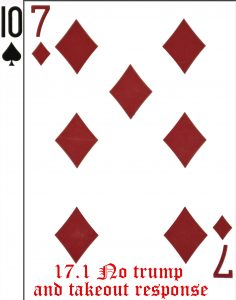 However, on 13-15 points he will bid 3NT, provided he has stoppers in the other three suits. It is a shutout bid and North will dispense with his promised rebid:

South has 15 points, a shade off the 16+ requirement for a jump shift. And with this hand he has no additional distributional values. In any event his three-card majors forbid any direct raise of opener’s suit. With a 4-3-3-3 distribution his best option is 3NT. With a 4-4-3-2 distribution South’s doubleton should be in ♥s in this instance.

North will be wise to pass. Even on North’s minimum 13 points the partnership has more than enough for Game in a no-trump contract. Incidentally, if North had opened 1NT, South’s reply would still have been 3NT.

In the next hand South has the same issue, even though he has a 4-card major:

Again, North has opened 1♥, but partner’s four-carder headed by the lonely Jack is too short on points to support. With no biddable suit of his own his best answer is still 3NT. However, swap South’s K♠ for an Ace, and he could respond 4♣ Swiss to show he holds two aces and a four-carder in North’s trump suit.

In the final hand the 4NT response to North’s new suit is the Blackwood Convention asking North to show his aces. By inference it is agreeing opener’s trump suit.

It is quite something when you hold five cards in your partner’s opening suit. South also has 18 points. Combined with North’s minimum of 13, they already have at least 31 points combined and they must set out to discover slam possibilities.

No Trump response to a no trump opener

As with all no trump bidding the description of the hand and its point count is very specific in Acol.

North opens 1NT, showing a modest 12-14 points. With a balanced hand and the necessary stoppers South simply responds to reveal his point count:

Takeout response to a no trump opener

Again North opens 1NT but this time South does not have a balanced hand, so will prefer a suit contract.

In the following hand South has 15 points:

Even if North was on minimum (12 points) the partnership has enough for Game in no trumps (even in a major if South’s heart/diamond holdings were swapped). If North insists on no trumps (he bids 3NT) and South will Pass. A rebid of 4♦ by North indicates he has a stronger hand (14 points) and a four-card diamond suit. South will go to Game at 5♦.

Wow! South has 20 points. North’s opening bid of 1NT shows a minimum of 12 points. Even so slam is a certainty.

South’s second response of 4NT is natural because it follows two level bidding. It is quantitative and asks opener to bid 6♥s if he has maximum points (14). On minimum he will take the partnership to Game, 4♥s.

Note that, instead of the 4NT response South could bid 4♣ (Gerber) to ask for Aces. However, after Jacoby, 4♣ Gerber could become confused with either a cue bid or to show a singleton, and players prefer the Texas/ Blackwood sequence instead. See the fuller entry on Jacoby at: Jacoby.

Back to Top
To continue reading go to: Blackwood
By Nigel Benetton – based on the UK Acol Bridge Bidding System