The Stayman Convention is a powerful tool to escape a deficient no trump contract. In these examples, we show South’s points which include points for long suit count, as allowed for a hand responding in a new suit. 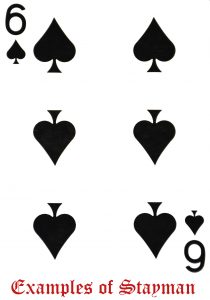 South has zilcho points! Stayman is a rescue response. He had to say something. North’s reply indicates no major suit holding. It is also taking a chance, because his partner has promised nothing more than a 4-card major. His bid did not even promise any points. North needs eight tricks. I’d be surprised if he makes it.

South has 10 points (including 2 for the singleton) this time. He will stop the partnership below Game. Again the Stayman 2♣s does not promise any points.  On this occasion, however, he has 8 HCP and two promising majors. South will Pass to agree ♥s. If South had, say, five ♠s including a King and Queen and four ♥s he might well bid 2♠s in his second response. Either way North need not rebid and the contract will aim to make eight tricks with hearts or spades as trumps. With a singleton ♦ South had to steer North away from a No Trump contract. With nothing worse than a doubleton and 10 points, responder would rarely call Stayman.

Things are beginning to look interesting. South has 12 HCP and will invite partner to Game in a suit contract. North’s reply shows a four-card spade suit but denies a heart suit.

Having failed to find a fit with his ♥s, South follows up with 2NT to ask partner to go to 3NT if he is on maximum points. With 12 points North Passes.

Had North bid 2♦s in his first response instead of 2♠s, it would have shown he had no better than three-carders in majors. With his singleton club South would Pass.

If South had three diamonds instead of four and a doubleton club, in the above bidding sequence he might go for Game with a 3NT response.

With 12 points South is once again looking for a major fit. But the 2♦ negative reply shows North has no 4-card major. South’s rebid to show his spades is an invitation to Game. He is asking partner to bid 4♠s if he is on maximum points with support of three cards in ♠s.

South is bursting with opportunity. He asks North to show any four-card major on his rebid. And he strikes pay dirt. North has four hearts. South on 14 points, knows they have a combined 26 points, enough for Game in a major suit. He bids 4♥s.

With the same hand, South still clinches Game with a 3NT response after a negative reply from North who in this example had only three ♥s:

South is sitting with 14 points. After a negative bid from North he jumps to the three level in ♥s (one more than necessary), which is forcing to Game. North will either agree hearts if he holds three of the cards with points (he would need the Q♥ or J♥ for example) or bid 3NT. He goes for Game in ♥s.

In the second sequence North has shown four card support for ♠s. South responds with 3♥s showing him ♥s was the major suit he wanted, not ♠s. Without a fit for spades, but still enough for Game, North will bid 3NT.