Most cryptic crossword clues are word play to some extent. This section, however, considers those cryptic clues that are more complex. The crossword complier may lead you on quite a merry dance with two or more stages you have to go through to reach just part of an anagram. 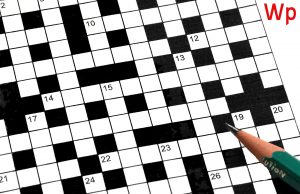 Then a second round of scratching your head to get another part of the anagram, followed by vague references to inserting something else, or using the initial letter of a word. You would be forgiven for thinking the setter of the crossword has gone a little too far!

On the other hand, under my note “short and sweet” even the briefest clue can have you scratching your head!

2] Miss opportunity to wrap up, heading off (4,3). Another way to say wrap up is “closeout”, meaning to sell off the stock of a business going into liquidation. Heading off is an action phrase telling you to remove the first letter “c” from closeout. The answer is “lose out”.

3] Something at the greengrocer’s that’s mostly under water (7). The answer is “iceberg” (also being the name for iceberg lettuce).

A little play on words in the form of “maybe” or “possibly” is not asking for a definition of a word. Instead it is asking for a synonym that is an example of the word given. You could call it a reverse question. For example, to the question, Language? The answer might be, say, Spanish. But if given the clue, “Spanish maybe”, the answer is “language.”

“Perhaps” is another example, and they are usually asking for a generic term.

In the phrase “Persian, perhaps”, perhaps is indicating a homonym for Persian. In making up your answer use the generic for a Persian, being an example of a cat. So use CAT in your anagram.

1] Possible result of a fare reduction (10). This is quite rare as it does not have a definition word! Possible is the maybe clue, asking you to give an example of. Fare reduction is nothing to do with buses! But food. The answer is “starvation”.

2] Horse with excellent name – Ben, maybe? The keyword here, maybe, is again asking for an example of. For horse use the word MOUNT. For excellent use A1. And the initial N for name. So Ben (being Ben Nevis), maybe is an example of? And the answer is “mountain”.

3] In Scotland, extended university years for Russian, perhaps (8). Perhaps is the keyword here, asking for an example of. For the word extended use LANG, a word meaning long in Scottish. Take U from university and for years use AGE. The answer is “language”.

4] Some earl or duke? Possibly (4). A short but multilevel clue. Possibly is asking for an example of. What are earls or dukes? Some is an added level, being a lurker keyword. So the answer is some of “earL OR Duke”. Answer “lord”.

5] Persian perhaps accommodating naked form of entertainment (7). Perhaps is asking what is Persian an example of? The answer is CAT. For naked use BARE. Note that accommodating is an insertion clue. So, insert BARE in the word CAT, to derive the answer “cabaret”.

7] Expert with good month to review app, perhaps (7). Again perhaps is asking for an example of what an “app” is. For expert use PRO, take G from good, and MAR for the month of march. The answer is “program”.

On the face of it, when the word “Panama” turns up, you assume it is referring to the place, and the clue is asking you to use the P in your anagram. But what should you make of “…Panama?” In this case you are being asked to give the reverse of what Panama is. It is an example of a HAT, and you use this in your anagram.

1] Eats having been swimming? (7). The question mark suggests wordplay here. You don’t want a word meaning “swimming” but a description of what might take place when you are swimming. In this case you see fish, that is, see food. The answer is “seafood”.

2] Rifle lost? Her gun could be in here (7). Rifle is an anagram flag. The question mark here is really sneaky, dividing up the anagram LOST HER. The answer is “holster”.

4] Describe former lover? Unattractive (7). The usual question mark calling for an example of. An example of a “former lover” is EX. Use PLANE for unattractive. The answer is “explain”.

5] Having lost money fallen through hole in trousers? (3,2,6). This question mark asks what might have happened, an example of? The answer is “out of pocket”.

6] Environment partially contained within Panama? (7). The question mark is asking for an example of “Panama”, which is HAT. For partially use A BIT. This is contained in HAT. The answer is “habitat”.

7] Glasses? They can make hight-pitched sounds (6). This clue is firstly asking what glasses is an example of. It is also a kind of double definition. The answer is “flutes”.

Look out for numbers that make letters if converted to the Roman number system. For example, for 100, use a “C” in the answer. International vehicle registration codes are another part of the cryptic armoury. For example, use D for Germany, and E for Spain.

2] Only about five crack (5). Use the roman V for five. About is the insert key, so insert V in a word for only, SOLE. The answer is “solve”.

3] A number under three finally put away (5). Use TEN for a number, with A of the clue. Use the last letter of threE (finally). The answer is “eaten”.

4] Allow one day to gather one hundred plants (8). For allow use LET. For one day is TUESday. Then insert the Roman number C for 100. The answer is “lettuces”.

5] There’s rumbling – fifty will go inside refuge (7). Use L for the Roman numeral for fifty. Rumbling is an anagram flag for THERES, for the full anagram THERESL. The answer is “shelter”.

6] Set apart from one’s love, in arrears (7). Take the Roman numeral I and S for one’s, then O, the score love in tennis. Use the synonym LATE for in arrears. The answer is “isolate”.

“This” as an indicator

When the word “this” turns up in a clue it sometimes indicates the definition word is also part of the anagram. For example, in:

And this is the shortest cryptic clue I have ever seen:

To create more of a head scratcher, crossword setters combine two or more key components in their clue.

1] Images backing US city article – second is making things greener (14). This is a combination clue using an anagram, an abbreviation and letter manipulation. When you come across the word “second” it often means you to use the S (the abbreviation of second). For images use PHOTOS. For US city use NY, backing it to make it YN. For article use the definite article THE. Add the S as I have said, and also IS from the clue. The answer is “photosynthesis”.

2] Temperature on earth changing and last of life, in conclusion, is endangered (10). A combination exercise of abbreviations, an anagram, letter manipulation and a synonym. The symbol for temperature is T. Changing indicates an anagram of EARTH. Last of lifE gives you an E. A synonym for conclusion is END. Thus, you have TEARTHEEND as your full anagram. The answer is “threatened”.