This section covers hands where there are two biddable suits of different lengths. Two-suit combinations in different lengths by one card will be: 5-4, and 6-5, oh, and the highly unlikely 7-6. Even the 6-5 combination is found in barely 1% of deals. For 5-4 it is 25% incidentally. 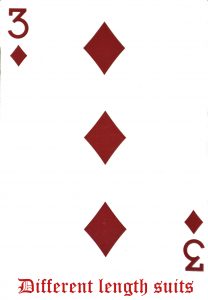 [5-4] With two suits of different lengths, for example, 5-4-2-2, you bid the longer suit first in most cases. But once again there are exceptions. If the 5-carder is weak it may be better to bid the 4-carder first. For example:

North decides not to bid his longer suit in this 5-4 combination given it is only a one-pointer (despite Rule One). Instead he opens 1♥ (preferring Rule Two to bid the higher-ranking suit first). Opener’s diamonds are weak. An opening bid of 1♦ followed by a rebid in ♥s could be construed by South as a “reverse bid”. This is a convention that shows a strong opening hand of 16+ points. It is discussed in more detail later in Chapter Fourteen about strong openers. Stronger opening hands. It is a reverse bid because it reverses the normal rule to open with the higher ranked suit first. By bidding ♥s first North avoids misleading partner into thinking he has a strong hand. He only has 13 points.

The general rule with a 4-card major and a 5-card minor, as your bid options, always open with the major suit.

With a 5-4 distribution ideally you need three bids to convey the full picture. The opening suit is repeated on the third call to indicate the extra card (bidding sequence A-B-A). If you don’t reach a third round of bidding your partner will still know that you have two biddable suits with at least a 4-4 distribution. So not too much of an issue.

[6-4] In other two suited hands of unequal length by two cards, the bidding sequences are a bit tricky. If you don’t achieve three rounds your partner will be misinformed.

For example, if your two suits are split 6-4, there is a different sequence to show the two-card gap. In Acol you bid and rebid the six-carder first before mentioning the 4-carder. (Bidding sequence A-A-B). Clearly if you are denied a third go, partner will think you have one five-carder. Remember, a rebid of your opening suit indicates a five-carder with at least 3 points. For this reason you should think twice about this attempted bid sequence. If the 6-carder is a minor suit and the 4-carder is either a major, or is heavy with honours, you may well be better off bidding the shorter suit first. You will be at the one-level, of course, and there will usually be room for a rebid (bidding sequence B-A). If you get to bid a third time, then repeat with your 6-carder (bidding sequence B-A-A).

The value of having a regular partner is that you will learn how to handle odd distribution patterns and cope with intervening bids. Note that the bidding sequence, B-A, will initially be taken by partner as a reverse bid indicating you have 16+ points. This will encourage partner to rebid himself. When you then repeat your 6-carder, he will modify his point estimation of your hand (you have less than 16) but will realise you have an unusual distribution pattern. You did not repeat your first suit so that must be a 4-carder. In repeating your second suit you are showing at least a five carder. You reversed the bidding so maybe it is really a 6-carder. Regular partners can reach these and other sometimes remarkably accurate conclusions with experience.

You may see a 6-4 combination in about 6% of deals. With a 6-4-2-1 pattern, in the following example, you bid the long suit first, 1♥, and rebid it on your second call too, hopefully at the lowest level, 2♥s. The four-carder is announced in your third bid, but it will have to be 4♦ s. This sequence shows just how expensive it can be to convey the full information about your hand:

With 12 points and a 6-4 combination of ♥s-♦ s, South opens with 1♥, his 6-card suit. Let’s say there is no intervening bid and North responds with 1♠. Second time round South can rebid his hearts again, 2♥s. This shows at least a five-carder at this stage. South plans to bid ♦ s next time round, but this depends on North’s rebid response. Say North responds upping his bid to 2♠. South will now bid 3♦ s, and North will figure out from the bidding sequence, A-A-B, that his partner is probably sitting with a 6-carder in ♥s, and a 4-carder in ♦ s.

In the next hand, the lower ranking suit is the longer and South will take a slightly different tack if he gets the chance to rebid at the one level. He does this because his bid is more informative, and there is more room for communication:

Same points and 6-4 combination. South opens with 1♦ . No surprise there. To show the 6-carder he would normally repeat ♦ s on his rebid. But following North’s reply of 1♥, South must decide whether to stick with the plan and bid 2♦ s or show his 4-carder. He decides to bid 1♠. The partnership is still at the one level after exchanging three bids. Whatever North responds South will have plenty of room to show his diamonds. He bids 3♦ s over partner’s second response of 2♥s. North now knows South has four spades and at least five diamonds, and no heart support. All this is pretty informative.

[6-5] And now for the pièce de résistance, the 6-5 distribution. Sorry, but there is no way of showing a 6-5 shape. In this case bid your hand as if it has a 6-4 or a 5-5 distribution (bidding sequence A-A-B or A-B-B). Either way, your 6-carder will get the vote. If your partner is not sure he will prefer to support your opening suit. In any case, if your six-carder is a major choose to bid your hand as if it had a 6-4 distribution.

Technically it is possible to show 6-5 by a bidding sequence of A-A-B-B. But that requires four bids from you, and you rarely get enough auction time to do that!

It may make sense, when in doubt, to bid for a 6-4 pattern. If you do get a fourth bid, you’re already set up with the A-A-B sequence, and you can complete the information with a full sequence of A-A-B-B if you get the chance, which does show a 6-5 pattern.

Where your card holding requires three or more calls to describe them properly, do not be a slave to these rules, bidding three times regardless. This will depend on interventions and how your partner responds. It may well be that you can afford only to make two of your bids, but that is perfectly all right; it is a matter of judgment.

In this next hand with a 6-5 distribution South has only 9 points. He is far too weak for a reverse bid, opening to show the 6-card ♦ . Instead he opens 1♥, which will hopefully allow for a simpler rebid in ♦s at the two level.

For the final page in the chapter go to: Three biddable suits