Before considering the overcall response in more detail, let’s first summarise what the basic overcall of a suit opening should promise: 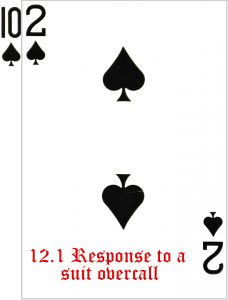 Nominally the overcaller needs 10+ points. Note that a simple overcall at the two level requires three more points than a one level bid. Extra values when dabbling in the minor suits is also required. All Acol players play the strong no trump in the overcall position.

Generally your expectations are somewhat negative in the overcall position. The side with the opening bid tends to have the upper hand. So it is rare for overcaller to negotiate a modest contract, let alone a Game bid. His job is to give partner as much information as he can about his hand, and at the very least signal a suitable opening lead. Meanwhile, if he can throw a spanner in the works, so much the better.

In the following examples both sides are not vulnerable and there is no intervening bid.

The nominal point count for raising partner is 6-9 points. With three-card support and six or more points, look no further. Raise partner to the next level.

West as responder to overcall

West has seven points and three-card support for overcaller’s suit. He bids 2♠s. Note he has correctly ignored the pointless diamond 5-carder.

In the next example, West has four-card support. Again he looks no further and raises an extra level. Even with just six high card points he double raises to 3♠s:

Do not be tempted to show the five-carder diamonds first, expecting to mention spades on a rebid. You may not get the chance and to hide your four-card fit in spades would be highly misleading. Note that a fit is much more important than high card points. This is emphasised in the final example:

West has only five points, yet five spades. Anyway, he can add three points for his short suit count. He raises straight to 4♠s. Always, his first priority is to support partner. With the above hand he must not even think of mentioning his clubs.

In responding to overcaller the raise conveys the same information over any intervening bid.

Against an opening bid of 1♥, the overcall of 1♠ shows East has 8-15 points and five ♠s. If he had overcalled at the two level, say 2♥s over an opening bid of 1♠, then East would have needed three more points, showing a point range of 11-15. South must have less than six points as indicated by his no bid.

West can now estimate the distribution of points and cards, as compared to his own hand, in considering what to bid.

North has at least 13 points, East at least 8 points for his one level overcall and South, let’s assume he has the maximum for him of 5 points. Add in West’s point count of seven, and he can so far account for 33 points.

So North and East must have the other 7 points between them. That would be, an Ace and a King, say, or two Kings and a Jack. In any event West will raise partner to 2♠s with his three-card support.

North’s promised rebid and possible rebid from overcaller will bring further clarity to the point count and distribution. Intelligence gathering like this is vital both in closing the bidding and preparing for play.

Nine times out of ten overcaller will pass after a raise.

With less than three-card support for partner in the overcall position, West will likely pass with less than ten points. Although big distribution values may tip the balance for a takeout with even less points. But for now we’ll consider hands with decent points and no more than a six-carder.

With 10+ points West can takeout partner at the two level with a five-carder topped by two honours. With the same points he can takeout with any weaker six-carder. West needs 13+ to takeout at the three level.

West has ten points and a five-card diamond suit topped with the Ace and Queen. He can bid 2♦s. In the next example, he has a weaker six-carder:

He only has 7 high card points but can add two points for long suit count. However, if his side were vulnerable he might pass in this case.

With no more than two cards in partner’s suit and a balanced hand a takeout is out of the question. For the no trump response to overcaller you need a stopper in opponent’s suit. If there has been an intervening bid then you just need a stopper in the intervener’s suit. Of course, with no points relevant for distribution the high card points are all you need to consider:

In this case West needs a stopper in hearts.

If there was an intervening bid West would need a stop in South’s suit. At the 1NT level he would also need a few more points, 10-11. The two and three no trump point criteria remain the same.

Generally, with two doubletons West should not consider no trumps with less than 12 points. At 12+ with stoppers, even with two doubletons, he has enough to respond 1NT. But even with 13 points, without stoppers West must pass. On the other hand, with 15 or more points, even if short of a stopper, he could bid 3NT.

West still needs a stopper, this time in North’s spades. He also has to bid at the two level to show a balanced hand and no support for partner’s suit.

It’s worth pointing out that if opener and overcaller were on minimum points the maximum points West could have is 16—unlikely since that would leave South on zero! I dare say North would double any leap of faith from West with a 3NT response.

Back to Top
To continue reading go to:
Response to a 1NT overcall