The 2NT overcall over a 1NT opener is a special Acol convention and can be made in the normal overcall position (second in hand) or in the protective position (fourth in hand—to keep the bidding open for partner). 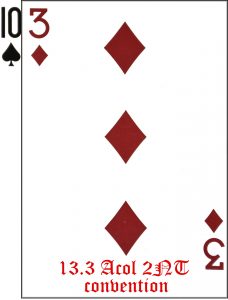 It shows a two-suiter and is Game forcing. Partner will respond in any four-card suit he holds and bids them in ascending order.

South must now keep the bidding open until the partnership reaches Game level. North may well find space to show his second suit (the ♦s). But in this case South raises to Game with three-card spade support:

In the next hand, North has the same distribution: 6-6-1-0. He overcalls 2NT to show a strong hand with two long suits.

Hopefully they will find a Game fit. This time the bidding progresses far enough for North to show his second suit, rebidding 4♣. South, probably with a doubleton heart, raises partner to Game at 4♥.

The Acol Two-Bid is a weak jump overcall at the two- or three-level. It is similar to the Acol Weak Two opening bid. It does not use the 2♣ call, which is reserved for the conventional 23+ points Two Club opener.

The Acol two-bid promises 6-10 points and:

The general principle to bear in mind when in the overcall position is this:

Shape is strength here and you would never consider the Acol two-bid with anything less than a good 6-carder.

You may wish to read up on the Acol Strong Two opener that shows 18-22 points. I am not sure whether it is less favoured than the weak Acol two-bid. In any event it is for partnership agreement. There may be a case for using the strong version for opening and the weak version for overcalling. Acol Strong Two

Protective bid. A protective bid is one made by fourth in hand when preceded by two passes. A third pass would end the bidding. The protective bid protects partner’s Pass so that he still has an opportunity to bid.

Rule No 20 – Never use any convention without first sharing your wisdom with partner. As a coded message the convention is a highly effective tool if used properly; otherwise it can be suicidal. And remember, opposition has a right to understand the conventions you are proposing to use.