Pre-emptive overcalls are intended to shut out the opposition. 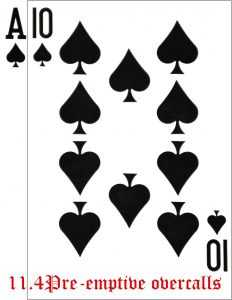 They start at the three level.

A 3NT overcall is natural and shows the same as a 2NT opener; but in addition a stopper in opponent’s suit. In reply, with stoppers in the other suits, South will pass. Without stoppers South will bid 4♣ as a negative. If the overcaller’s suit happens to be ♣s he will pass, if not he will bid 4♦.

East overcalls 3NT to show 20-22 points and a balanced hand. With a weak hand West no bids. While he probably lacks stoppers in any suit he will be fairly balanced. With a wild distribution, however, he would have signalled East to avoid no trumps. In the event East is happy with his NT contract. See also: The 2NT opening bid

The three-suit overcall means the same as when used in the opening position: no more than 9 points and at least a seven-carder. It is made over an opening bid of one of a suit.

It is a strong-pre-emptive showing at least 11 points. With a seven-carder the overcaller needs 14 points. This is rarely bid over a 1 suit opener. But here are some examples where it might be warranted:

Again this is similar to the 5-suit opening bid used to show interest in the minor suits. Typically, you want the same points as a 4-suit overcall but more heavily represented with at least a nine-carder. Needless to say it is a rare bid. For further details see the section in Chapter Eighteen. The 5 suit opener

Jump bid. A jump bid is a bid of one more than necessary, usually of a no trump call. For example: 1♥ – 2NT.

Overcall. An overcall is a bid by defender over an opening bid.

Sacrifice. A sacrifice bid is a deliberate attempt to deny opponents from bidding a contract. It is made in the belief that penalty points lost will be less than points won below the line for the opponents.

Rule No 18 – Never make an overcall in a suit that can lose more than two tricks. For example, a five-carder headed by an ace-queen and three small cards is not going to cut the mustard. Whereas a suit with a good run, Queen, Jack, 10 and an 8 would be a workable combo.