An opening bid of 2♣s is the most powerful single bid in Acol. It means opener has 23+ points. 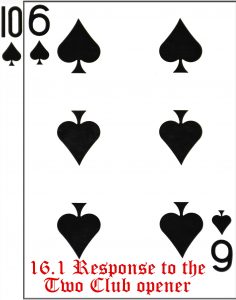 That leaves just 17 points left for the other three players to share.

His partner cannot pass on this opening bid, even if he has no points. With zilchos South can give the standard 2♦ negative response. It keeps the bidding open for North to make his rebid.

The 2♦ responses to the strong opener show:

* a biddable suit here is, if in majors, K-J-x-x minimum, or a 5-card minor at the three level.

Here is a summary of South’s options as responder to a 2♣ opening bid:

With a singleton ♠ and no points South must keep his partner out of No Trumps. Game in hearts may not make it, but the penalties will be less than in a no trump contract.

With his 2NT response South shows a balanced hand with 7-9 points. In the second round of the bidding South supports partner’s hearts taking him to Game. Having agreed trumps North can now explore slam using the 4NT bid as Blackwood asking for aces. He’ll be disappointed! Again see entry in Chapter Seventeen. See:
Blackwood.
South as responder
♠ 8 6
♥ K J 9
♦ A 10 8 6 5
♣ 8 6 2

South shows 0-6 points with his negative 2♦ response. However, he has six points and three four-carders. He can afford to raise any rebid by North to the four level, other than ♥s. If North rebid 2♥ then South, knowing the partnership has stoppers in ♥s would bid 3NT. In the event he is happy to raise North’s spades to Game.

South only has two points, too low to boast about his six-carder. But North’s rebid in ♠s is music to his ears. South jumps straight to Game, 4♠s.

The Herbert Second Negative takes the place of the normal 2NT second negative. It means the same thing, but at the cheaper level.

South’s 2♦ shows 0-6 points. His rebid response of 2♠ says nothing about his ♠ suit but narrows his point count to 0-3. This is the Herbert Second Negative, indicated by his use of the lowest available suit for the second response.

Note that with 4-7 points South would have rebid at the three level (3♠s). But there is a danger where, in the next example, South wants to show, not 4-7 points, but a very long spade suit. He has a six-carder:

To make positive noises about his long suit he has had to go to the three level on his rebid, even though he has less than 4 points—and he does not even know anything about opener’s ♠s. Generally, however, the Herbert Second Negative avoids the weak hand playing in 2NT, which is the normal second negative that would put all the power on the table.

As a first response, 2NT shows 7-9 points and a balanced hand. If North was planning to show a suit on rebid, he would now stop below Game in a contract of his choice. If he was planning to bid in no trumps, he can now dispense with the usual limit rebid, and, adding up the points might explore slam in a No Trump contract.

In the next example, South shows 10-12 points, and again, a balanced hand. It is a slam suggestion. If North was planning to show a suit on rebid, he does so, expecting to find slam in that direction. If he was planning a no trump on rebid, as above, he will add up the points and select the appropriate No Trump level.

In both cases South is not expected to reply.

The standard negative response to the 2♣ opener of 2♦ means 0-6 points. If forced to bid again, with 0-2 points South will rebid 2NT as a second negative. With 3-6 points and a balanced he could bid 3NT, otherwise 3 of a suit.

In the next sequence North jump bids in a new suit (3♥) over partner’s negative response. This jump bid asks South to cue bid any ace held.

The 3NT response by South shows he holds no aces. A 4NT reply from North would be the Direct King Convention asking for Kings. This convention is described fully in Chapter Four. Conventions to suit opener

If North bids a suit at the same level over the 2♦ negative reply, a double raise (4♠) by South at this stage would show 6-8 points, four-card trump support, and no Ace or void. A 4NT rebid after this sequence by North would again be the Acol Direct King convention, enquiring after South’s Kings.

A similar sequence, except South’s 3NT shows he has no trump support, but a balanced hand of 6-8 points, and no Aces. A 4NT rebid by North would again be the Direct King Convention.

A jump rebid in a new suit by South (after his initial 2♦ bid) shows a long solid suit without Ace or void. The 4♦ bid is ‘new’ because the first 2♦ was the conventional negative bid.

The next example is similar to the above sequence, except here South is showing a long solid ♥ suit by his double jump in a new suit:

In the final sequence South is showing 7+ points and a 5-card ♦ suit.


Back to Top
To continue reading go to: Response to the Two No Trump opener