Lurkers hide in plain sight. In other words the full answer is already in the clue as a phrase across so many words, or partial words. All you have to do is find it! 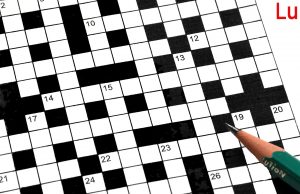 about, as, boxing, by, during, enthrals, find it here, found, holds this, in part, installed, leaving, of, overshadows, overwhelming, partly, portion of, quantity, some, somewhat, swallowing, that somewhat (the word(s) you want are in the clue), to an extent, to expose, within, with some.

For example, in this phrase “current ideology” you can find the answer from currenT IDEology, “tide”.

After a certain phrase in a cryptic clue, “not to maximum extent” suggests there is a lurker in the phrase, meaning not all the letters. Lurkers can also be hidden in reverse (a lurker is hidden backwards), as in the first example.

1] Language rejected by cryptographer (5). The lurker is crypTOGRApher. Rejected is requiring this to be reveresed, thus the answer is “argot”, which is a specialised vocabulary used by a select group.

3] Leave out some heirloom I treasure (4). You need a synonym for leave out. Some is the lurker flag. Take the answer from heirloOM I Treasure, to get “omit”.

4] Girl found over in Hammersmith (4). Found is the lurker flag. Over is keyword to reverse the selected letters from hAMMErsmith. The answer is “Emma”.

5] Some may do lemonade – if upset, that sounds good (6). Some is the lurker flag. Upset is the keyword to reverse the letters from maY DO LEMonade, to get YDOLEM, for the answer “melody”.

7] Scrub up some concrete ledge (6). Scrub is the definition word. “Up” in a down clue tells you to reverse the letters. Some is the lurker flag. The answer is “delete”.