Texas is used to steer the partnership towards a suit contract. As with Jacoby it is another fit-finding rescue from the perils of no trumps.

Texas is a bid of 4♦ or 4♥ opposite a 1NT opener—or a 2NT opener for that matter (discussed in a later chapter). Responder intends to become the dummy. 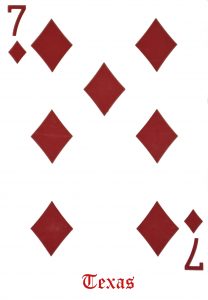 The idea is to make the no-trump bidder into declarer in a suit contract so that his hand remains hidden. It works on the same principles as Jacoby but operates at a higher Game level. It denies any slam intentions and shows a good six card major with about 10 points. Responder is showing an unbalanced hand, usually with a singleton, or at least a doubleton. Texas applies to the major suits only:

In response to 1NT opener:

The request in each case is obligatory.

Texas and Jacoby can work together. So while Texas is used to stop at Game, Jacoby can also be slam going (on an inquiry basis).

South has 12 points and bids 4♦ s to indicate he is not interested in a slam. North will choose ♥ as his suit and stop at Game:

South has 14 points and is keen to try for a slam with his 7-card spade suit. He uses Jacoby as a transfer bid, and then jump shifts to 4♠s. This is one more level than necessary, indicating South has both strength and length in spades:

Another 7-card spade suit for South, and 15 points this time:

South uses Texas as Game forcing. North will play the round with his hand hidden.

If South had another four points from an extra Ace in the above hand, there would have been slam possibilities. On maximum, North’s 14 points would give them a combined 33 points. In this scenario South might bid 4NT in response to North’s 4♠. This is the standard Blackwood convention asking North how many Aces he holds. Blackwood is covered in Chapter Seventeen. Blackwood

Gerber is an immediate response of 4♣s to an opening bid of 1NT or 2NT and asks for aces. Since we play the weak no trump (12-14 points) responder would need at least 20 points to launch this convention. Pretty rare, I’d say. So it is mentioned here just for reference. A detailed description of Gerber can be found in Chapter Seventeen – Responding with stronger hands. Gerber

To continue reading go to: Smolen