Rebids by responder will show 10+ points. 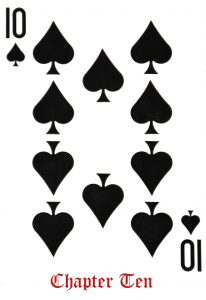 Opener needs to bear in mind that below this threshold partner may well leave him with his rebid. This is why it is so important for opener to plan his rebid carefully before first opening his mouth!

Up to this point, with two bids under his belt, North has fine-tuned his communication. His first bid of one of a suit showed 13-19 points. A raise of his suit on the rebid at the next level narrowed this down to 13-15 points, and indicated his suit was a 5-carder (with 16-19 points he would have raised at one more than necessary). In any event he has no biddable second suit. As we have said before, communication during the auction is as much about what you bid as what you do not bid.

South is now much better informed. It is his turn to make his second response. Does he cool it, take the mid-line, or get excited? Remember, if his first response was one of a new suit at the one level he could have as little as 6 points and a 4-carder. With opener having raised at the minimum level there seems to be scant pickings.

1] In the first two tables the responses by South are a “sign-off”, signalling the partnership has reached a dead end.

2] On the other hand, taking any bid to just below Game is usually invitational. As in the next example a jump rebid by responder is inviting, but not  forcing to Game:

3] In the following sequence a new suit bid at the next available level by responder is a one-round force:

4] In the next sequence South reverse bids his two biddable suits to show 13+ points. Normally he would show his higher-ranking suit (♠s) first, and then his ♥s on his second response. In this case he bids hearts first to signal extra values. This is forcing to Game.

The reverse asks opener to bid No Trumps if holding a stop in the fourth unbid suit (in this case ♣s). A stop would be Q-x, or J-x-x minimum:

5] Following a No Trump rebid, a return to opener’s suit is forcing to game:

Note that if opener rebids with a lower-ranking suit then South should assume the opening bid was a 5-carder. For example, in this sequence:

With 3-card trump support, South could now raise on his second response, choosing the suit that suggests the best fit.

To continue reading go to: Guide to responses

Further pages in this chapter are:
Forcing response
Wolff