Sharples is the convention to show power in the minor suits. 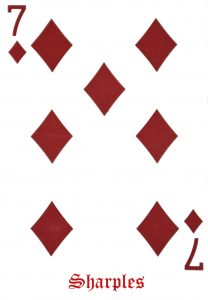 It is a bid of 4♣ or 4♦ in answer to the Stayman 2♦ negative. It is like the Weissberger response but differs in one important respect. It shows an interest in minors not majors.

The typical Sharples hand will hold one or two 4-card minors, and perhaps even a 4-card major.

By convention, if he has two 4-card minors South bids ♣s first. Bidding ♦s first would deny a ♣ holding.

It is a strong convention, usually showing 16+ points in responder’s hand; it needs to be strong to contemplate Game in a minor, which requires the five level. On minimum points North will need 16 points (including distributional points) from South to provide the necessary 29 points required for Game. North promised a minimum 12 points in his opening bid of 1NT but since the partnership is transferring to a suit contract he is likely to have at least one more point for distribution.

South’s response of 4♣s, signalling Sharples, is showing a 4-card ♣ suit, although he may also have a 4-card ♦ suit. With 4-card support, North will raise him to Game at 5♣s.

In the next bidding sequence South is showing he has a 4-card ♦ suit, which denies a biddable ♣ suit. Here, North does not raise to 5♦ s, preferring a 4NT response as a negative bid to show he does not hold four cards in ♦ s. If North had a stronger hand, he might well have replied 5NT as a strong negative.

When we have covered stronger hands in later chapters (there are more conventions to come!) this table will appear in extended form in a future chapter.

Jump raise. A jump raise is a raise of two levels in partner’s suit. For example, 1♥ raised to 3♥. It is sometimes called a Double Raise.

Rule No 11 – Some conventions do not work together. It is not a case of the more the merrier—quite the reverse! Too many conventions will lead to confusion and misinformation. Conventions are for partnership agreement. Use only those that work for you.