Opener has bid 2NT to show 20-22 points and a balanced hand. 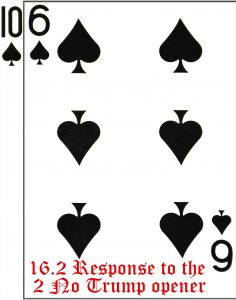 With no biddable suit South will reply with the following limit responses:

With less than 11 points in South’s hand the partnership will never have enough for a slam even if North were on a maximum 22 points. South shuts off the bidding with 3NT for a Game contract.

With 13-14 points and a balanced hand South can jump raise to 6NT:

Even if both partners were on minimum points, North on 20 and South on 13, they have at least 33 points combined, enough for a small slam. South’s 6NT is also a sign-off.

In the next bid sequence South shows 15-16 points with his 5NT response. This is inviting North to go for the 7NT grand slam if he is on maximum points. With North’s maximum 22 points and South’s minimum 15 points they still have a combined 37 points, dead right for a grand slam. If North is on minimum he will bid 6NT to settle for a small slam contract:

In the final sequence, with South holding 17+ points there is no point exploring. He dives straight in for the grand slam, bidding 7NT in response to North’s opening bid of 2NT:

Suit Response to a 2NT opener

Note that Baron, Flint and, of course, Gerber are conventions that force opener to rebid. They are covered in the next section.

In this sequence, following a 2NT rebid by North, the matter is simple arithmetic. South would pass a 3NT rebid by North on 0-2 points, otherwise South will raise with a better hand:

Jump shift. This is a response in a new suit at one level more than necessary. For example, 1♠ – 3♥.

Rule No 23 – When partner opens the bidding at the two level you must respond even if your hold a hand without any points.

Back to Top
To continue reading go to: Conventions and the 2NT opener
By Nigel Benetton – based on the UK Acol Bridge Bidding System