Leading to a NT contract

In a no trump contract lead the highest of your partner’s suit. It is the best lead to make. There is no point leading high-low, of course, and neither should you lead opponent’s suit(s). 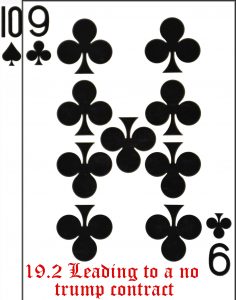 Supposing he bid ♥s, and you happen to hold ♥ J 7 4 3. You should lead with the ♥J. This will enable your partner to assess the position of those honours not in his hand. Note that had declarer intimated a stop in partner’s suit, you may prefer not to lead it—although a lead at any rate would promote your partner’s hand if nothing else.

With a long suit you can also lead fourth from the top (as with suit contracts). And again, lead top of a worthless suit: lead the Queen from Q J 9 2 and lead the Jack from J 10 9 4.

Indeed, in most cases leads to a no trump contract are the same as those for suits. However, in no trumps the lead of an ace from a three-carder is asking partner to drop an honour if he has one. So unlike with a suit contract you would normally lead the next best card: the ♥K, for example, from ♥ A K 7. Similarly, while you should not underlead an ace in a long suit when playing a suit contract, it is preferable to do so when defending against a no trump contract. So from ♣ A 8 6 4 2 it is OK to lead a low card, say, ♠6, as mildly encouraging.

Handling three-carders are also the same as for the suit contract (pull out the card in bold):

In no trump contracts lead through dummy’s strength as a final choice.

Normally, when your partner doubles an opponent’s bid it means he has a good holding in the same suit. This is the Lead directing double. Playing in defence you must remember to lead that suit back to him when you can.

North is declarer in a ♦ contract, so East leads to the first trick. He leads a spade, not only through dummy South’s strength, but also towards West’s ♠ holding (as he indicated by his double call).

However, when a player who will not lead to the first trick, has initially doubled a no trump contract, this is also the Lead directing double. It has three flavours:

The types of leads vary slightly depending on whether you are attacking a no trump or a suit contract, but in both cases you use the auction preceding play as your guideline.

In this simple bidding sequence:

South, who first mentioned the trump suit, is declarer with a contract to make eight tricks in spades. Left of declarer is West who will lead to the first trick. He has this hand:

Before leading to the first trick West must consider the bidding. North opened 1♦ so he has at least four cards in that suit. He probably has 3♠s, no more, otherwise he would have opened with them instead. So we can guess 7 of his 13 cards. We’ll know the rest when he puts his hand down as the dummy. East has at least 4♥s with honour points. He does not have enough support to raise his partner’s clubs next time round. As for South he probably has only four spades, otherwise he might have raised them second time round. So at a guess North-South have seven, maybe eight spades between them; less West’s holding, suggests East is sitting with three trumps.

So what are West’s options:

He can lead a ♦: it is a good idea to lead through strength (North’s preferred suit). Or he could lead to his partner’s hearts. He could also lead top of a sequence, the ♣A. It is rarely a good idea to lead trumps, especially given the rule that, while you should lead through strength, you should also lead to weakness (in South’s hand). Another rule is to lead high-low of a doubleton. This is a signal to partner (if he is vigilant) that West will be void after two rounds and could ruff any further card led (in this case ♦s). So West leads high, J♦. South takes it with dummy’s K♦ and East puts in a low card. The next time West gets the lead he will play the ♦7. If East gets a chance for a third round of that suit he will return a ♦, offering West the opportunity to ruff. If not East would likely lead to his partner’s clubs.

From this simple example, it can be seen that there are several options based on the bidding sequence and the actual cards held.

Back to Top
To continue reading go to: In Play – Declarer
By Nigel Benetton – based on the UK Acol Bridge Bidding System