Astro is an overcall bid of 2♣ or 2♦ over a 1NT opener. It can also be used in the protective position. Point spread is typically 11-12 plus distribution. 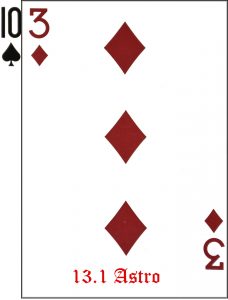 It shows 5-4 in two suits, one of which is called the anchor major:

The ♥s and ♠s in each case are the anchor majors and the hand will be unsuitable for a call of “double” i.e. because it will be below 16 points.

In response partner will raise the respective major if he holds 4-card support, or 3-card support headed by an honour, and about 6 points. As a negative response he should generally bid the cheapest suit (that is the “neutral suit”). Overcaller would pass if his second suit happened to be the neutral suit:

North opens 1NT to show 12-14 points and a balanced hand. East’s 2♦ is Astro, promising nine cards between ♠s and another suit (♥s or ♣s). West plumps for ♥s at the two level, indicating no Game ambitions. East’s pass reveals that ♥s was his other suit. West will play the contract hoping to make eight tricks with ♥s as trumps.

With support for the anchor major (♠s) this time and the hand is strong enough for a Game try, that is, 13+ points. West jumps in the anchor suit. East passes to stop below Game, however, having figured insufficient combined points for Game.

In this third example, East’s Astro shows ♥s are his anchor major and his other suit of interest is a minor. West’s reply is a negative bid, showing a balanced hand. He has no more than three ♥s. They may even be the doubleton. He might have four spades but certainly no fit for a suit contract.

Back to Top
To continue reading go to: Takeout double
By Nigel Benetton – based on the UK Acol Bridge Bidding System