So you have an opening bid. 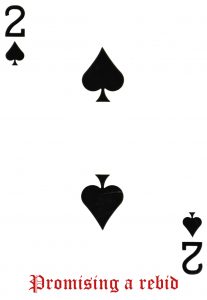 But before you get too excited about making your first bid please remember this cardinal rule: to bid in a suit you must have a rebid. You cannot leave partner in the lurch. You cannot pass or make a ‘no bid’ second time round. You must still bid. So, what are you going to say?

Here is a hand, sorted by South. It’s a pretty good one:

Totting up his points he has 15 in high cards. He definitely has an opening hand. He should open his long suit first and so bids 1♠. For his rebid he plans to show hearts. The level depends, of course, on the first round of bidding. To make it simple let’s say West passes, and North replies with a bid of 2♦s. What does this mean? It means:

1] He does not have many spades, probably three at the most. So he has no support for South in this suit.

2] His longest suit is diamonds, with a minimum of four cards.

East also passes. This is going to be easy! South goes ahead with his plan to show hearts. He bids 2♥s on his rebid, telling North he has four cards in hearts (otherwise with five he would have bid them first). He has less than 16 points in total, otherwise he might have bid a jump shift, which is a bid of one more than necessary in a new suit. A key point to note here is that what you don’t say is as important as what you do say in conveying information about your hand.

North suggests he has more than 10 points by rebidding. He chooses South’s first suit by raising him to 2♠s. South rebids his spades at 3♠s to show his preferred suit. This tells North the suit is a 5-carder with at least 3 HCP. They need a combined 26 points to make game (which would be a successful contract of 4♠s). North sees they have enough and goes for game in 4♠s. South was first to suggest the suit so he is declarer, and he plays both his hand and North’s dummy.

So you see, before launching your opening bid, you must consider what your rebid is going to be. Your choice will be one of the following:

Note that a first response from North in No Trumps is also a sign off (not forcing), whereby South would not have to rebid. With his hand though he might still want to respond to show his other suit.

To recap, a suit has to be biddable in the first place: a 4-carder requires 3 HCP, while any 5-carder will do, even without points. But to be rebiddable that is an entirely different matter. A 4-card suit can only be rebid if it is supported by partner. Without support he cannot rebid his 4-card suit. To rebid a 5-carder does require 3 HCP. It is important, therefore, to consider your rebid before opening because you will require either a second 4-card suit, or a 5-carder with a minimum of 3 HCP to do so.

Note that a holding of two 4-carders in your hand may not necessarily offer a rebid, especially if the points are evenly spread between the two suits. An opening bid of 1NT might well describe your hand better in this instance. No trumps are “limit bids” so there is no promise of a rebid. We discuss no trump openers in Chapter Five.

There are also cases when you can open one of a suit with less than 12 points, but you need a particularly long suit, typically a six- or a seven-carder. These exotic bids are reserved for hands with weird distribution, which we cover in Chapter Eighteen.

The weakest suit you should rebid is a five-card suit as good as Q J x x x. Note that the ‘x’ in card symbolism means any card from 2-10.

Of course, it is better to have a stronger five-card suit such as Q J 10 x x or A K x x x. A suitable response from your partner will add to your options. For example, by raising your suit he is showing support with at least four cards in that suit.

Finally, note that a weak six-carder can be rebid.

The bidding ends only when there are three passes in succession.