Partner has opened one of a suit, which you cannot support, nor do you have a suitable alternative suit. 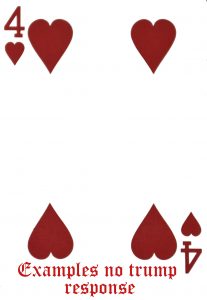 Since you have a balanced hand a No Trump response could be your answer.

1] With 14 points North opens with his only biddable suit, 1♦ . South has a perfect balanced hand but little support for the minor suit. He bids 1NT to show 6-9 points and no biddable suit.

The partnership cannot have more than a combined 23 points. North raises to 2NT on his rebid to stop below Game.

2] In the next hand, North again has 14 points, and bids 1♠, correctly showing his longer suit. He plans to bid ♥s for his promised rebid. South responds 1NT to show 6-9 points and no support for trumps. If he had a 5-card minor he might have shown this suit instead (and in a suit response he can add an extra point for his doubleton).

North now shows his other suit, with a bid of 2♥s. South correctly interprets that North is not keen for a No Trump contract (he must have two doubletons, based on him showing two major suits). So South puts his partner back to his original suit with a response of 2♠s. North will no bid, having established insufficient combined points to consider Game.

Remember, there is no point raising to 3♠s, because it is not enough for Game. Better to clinch a 2♠ contract than risk an undertrick and lose a potential 60 below the line. It is important to understand the signals during the auction. Unless you have a strong chance of making Game on one deal (requiring a 3NT, 4-major, or 5-minor contract) you may as well stop at the two level. Whether you make eight tricks or nine tricks in a major contract is immaterial, so long as you get points below the line. Either way you will only reach Game with a second deal. When the signals are clear you do not have enough combined points for Game sign off as soon as possible.

In this chapter we have dealt with a response to the single suit opener at below Game level. Responses by partners with stronger hands are discussed in Chapter Ten.