So, following on from the previous table “Response to the 1NT overcall”, here are some additional bids that take account of distribution values: 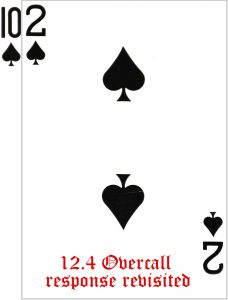 The use of conventions in response to a 1NT overcall are “systems on” and strictly for partnership agreement. They are only valid in the absence of an intervention. Intervention makes the bid “natural” with higher points and preferably a 6-carder suit at the two level.

In response to the overcall the convention is a sign-off with less than 8 points. With 8-9 points West is inviting Game. With 10+ points he is forcing. If the partnership reaches a second round of bidding then West can clarify his points when, for example he will pass on 0-7 points, and so on.

By the same token raising partner’s suit can also be made on relatively few high card points where distribution values warrant. It is worth repeating that the first thing you consider in responding to the overcall is to support partner wherever possible. In each of the below sequences East has at least a 5-card major with a point range of 8-15. You can assume a nominal 10 points.

In the first line with three hearts in partner’s suit, even on three or four points you should raise him to 2♥s. North’s opening denies majors while South’s pass speaks for itself. East’s point count is likely to be in the upper range for his overcall. In the next line, North likely has a good hand, but still no support from partner. West can raise partner to 2♠s with good four-card support, even on two points.

Clearly, you do not need many points when working with the overcall since the object is to get into opponent’s way as much as possible. Remember the more unbalanced your hand the less high card points you need: length is strength.

In addition to considering your distribution values, you may like to consider the “Losing trick count” as an additional guide to bidding in borderline cases.

The “Losing Trick Count” is another tool for assessing the combined strength of a partnership when it has found a fit and is intending to play in a suit contract. The fourth and subsequent cards in any suit are ignored for the purposes of working out the losing trick count.

For a void or a singleton ace you have no losers. Similarly for a doubleton ace-king combination there are no losers. On the other hand you must count one losing trick for any singleton other than an ace. The only three-card suit that counts zero would, of course, be A-K-Q.

Count one losing trick for the following combinations:

Count two losing tricks for any:

And three losing tricks for any:

Note that only the ace, king and queen can be winners, while only the first three cards in any suit can be losers. So no suit you hold can count for more than three losers. In the example East-West are working towards a ♠ contract:

This hand is interpreted as follows (ignoring the fourth and fifth cards):

This hand will therefore suffer six losing tricks. Note that the Jack also gets the no-name treatment (x).

Once you have counted your losers you will be wondering what happens next since it is the combined losers for the partnership we are looking for. It may seem bizarre but overcaller will assume his partner has nine losers. And for his part, responder will assume overcaller has seven losers.

In the above example West knows he has six losers. He adds them to the assumed count of nine from East to arrive at a combined 15 losers. You can then perform two miracles:

Subtract the total from 18 to give the level at which the partnership should bid for trumps. In this case, 18-15, meaning they should go no higher than a 3♠ contract.

Subtract the total from 24 to get the number of tricks the partnership should expect to make. In this case, 24-15, meaning nine tricks with spades as trumps (that, of course is a bid of 3♠s).

Vulnerability is another point not to overlook. Any side that has already won a Game is vulnerable, which exposes them to double penalties for undertricks. If only the opposition is vulnerable you can afford to take more risks if it means you can thwart their chance of making Rubber. In a non-vulnerable position, the cost of losing is cheap compared to the 700 points opponent’s are set to earn if they make another Game and win the Rubber.

On the other hand, if your side is vulnerable and in the overcall position the partnership will need to be far more cautious, especially if opponents are yet to win a Game.

Double raise. This is a bid raising partner’s suit by one level more than necessary. For example, 1♠ raised to 3♠. Sometimes also called a jump raise.

Rule No 19 – Remember, length is strength! In responding to the overcall three or more card support for partner is far more important than high card points.