The cue bid is a very useful convention for exploring slam possibilities while keeping the bidding at the lowest possible level. 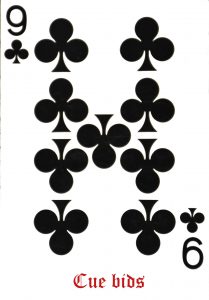 You recognise a cue bid under the following two conditions:

1] When the trump suit has been agreed by a direct double raise:

2] When a jump shift agrees the first bid suit as trumps by inference:

In each case the cue bid indicates first round control (that is, an Ace or void) in the suit bid, and requests partner to show the same, lowest ranking suit first.

In this way cue bids are intended to find controls in side suits so that the partnership can figure out if they can bid up to a slam contract.

If responder is on minimum points he should return to the trump suit—as he does in the following example:

In the next example, 4♣ is the cue bid showing North has first round control in ♣s. But South returns to the trump suit showing a negative hand for a slam.

Here is another cue bid from North, this time 4♦ showing his ♦A as a first round control. He is hoping to hear if South has the ♣A. Note that by showing his cheapest suit North gives South a chance to bid.

Cue bidding can originate from either partner.

With a minimum hand responder must not make a rebid that drives the contract above Game level. But with better than minimum he should reply if possible with a return cue bid or make a return cue bid in a doubtful situation provided the level is not raised.

North again opens 1♠ and South with this hand, raises him to 3♠:

North rebids with 4♣ as a cue bid showing he has the A♣. South replies 4♥ to show his first round control in that suit (A♥ in this case). Remember, partner is asked by the cue bid to show the lowest ranking suit first. As he did not bid 4♦ then he denies control in that suit.

In the next example, South replies 4♦ to the cue bid. This time he shows first round control in ♦s, but this says nothing about his ♥s

With the following hand, South bids 4♠ because his void in ♣s matches North’s control.

An “Advance Cue Bid” is one that shows first-round control when the trump suit has not yet been agreed by a raise.

In the following sequence North’s 1NT opener indicates 12-14 points and a balanced hand, as usual. South’s 3♥ jump takeout is forcing to Game. South shows 12-15 points. In response where a rebid does not cost another level, North can cue bid to show where an Ace is held. It also shows his hand is on the maximum point count of 14. His 3♠ cue bid shows he holds the A♠:

On maximum (15 points) South will take the partnership into a Game contract, falling short of any slam suggestion that would otherwise require a combined count of 33 points.

Back to Top
To continue reading go to: Trial bids