There are some tricky customers in the cryptic universe, to be sure. The skill of the crossword setter is in the way in which he tricks you into going down the wrong path. Your skill is to develop the intuition to know when! 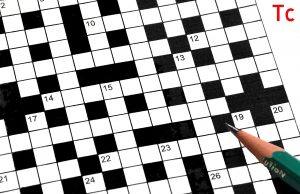 1] Key. Don’t be led astray thinking only about a lock in a door. It could instead refer to the key of a computer keyboard.

2] Kind. Sometimes the setter will use “kind” in his clue in a context that makes you think of someone being thoughtful or considerate. Chances are he really means a type of something, or a sort of.

3] Mars (with a capital) might turn out not to be the planet, but “mars” as in spoils something.

The point is not to take things at face value! Instead, say to yourself: “He’s trying to trick me!”

Just consider these examples of misleading associations, misuse of words and other mix ups described below.

1] Popular immoral acts to be stopped by Old Bill (7). This shows a typical trick in a cryptic clue where the setter presents two words that normally go together, but which do not in the clue! In this case “Old Bill” is a nickname for a police officer. But that is not what is meant here. Instead, ignore the word association. The definition word is “Bill”. It has nothing to do with “Old” at all. The answer is “Invoice”. You work this out as follows:

For popular use IN, as being in fashion.  For immoral acts use VICE. You then use O, the abbreviation of old. Stopped is an insertion indicator. Put O in INVICE.

2] Train, please, on two-thirds of RAF jets (10). The obvious association is “RAF jets”. But don’t let that fool you! Separate the two. “Jets” here alone is the definition word. Train is the anagram flag for “please, on”. So don’t let the sneaky comma put you off. You join the two words to make PLEASEON. Two-thirds is a letter manipulation signal. Use two-thirds of RAF, to add RA to your anagram, which combines to PLEASEONRA. Unravelling this gives the answer, “aeroplanes”.

3] Fertile places – rat arrives (10). In this example, again you are led to assume an incorrect word association, that of rats and fertile places such as fields or meadows. But not so. The definition word you are looking for is “Fertile places”. Instead of associating rat with fertile places you need something else entirely. To rat on is to give someone away, for which we use the slang term GRASS. For “Arrives” we decipher a word for the arrival of an aeroplane LANDS. The answer then is “grasslands”.

4] Disagreeable sound ringing gong (7). This really leads you up the garden path! The obvious word associations are the ringing of bells, gongs and so on. But no. In this clue ringing means “contains”, that is, surrounds the letters. While “gong” is nothing to do with sound at all, but a medal, OM (Order of merit). Another word for sound is noise. “Disagreeable” is the definition word. So NOISE contains OM. Thus: “noisome” is the answer.

5] Yank sure loves US! (9). Well, you can’t be blamed for associating yank with the United States! But yank here is an anagram flag for SURELOVES. The answer is “ourselves”.

6] Something cast in gold for so long. At first you might associate the clue with length, that something is so long. This, of course, is misleading. For “something cast” use DIE. For gold, use AU. In is the insert flag. Put “die” in “au”. The answer is “adieu” (“so long!” “good bye.”)

7] Spots on head – lack of care (8). You are looking for the definition for “lack of care”. This is not only a mix-up of noun and verb but is also mixing single and plural. For “head” you need to use NESS (as in headland – a projection of coastline into the sea). For “Spots” you might think of “see” or “notices”. But you are really looking for a noun. And it is a single word, RASH. All right this is a group of spots, but I think you get the idea. The answer is “rashness”.

Watch out for commas. Sometimes two words, separated by a comma, are both part of the anagram. In practice it might be a good technique to cross any comma out in a cryptic clue before you start!

1] Possibly a sugar, not something bitter (9). Possibly is the anagram flag, so we can ignore the comma. The anagram is ASUGARNOT. The answer is “Angostura”.

3] Cunning plan, petrol as driving force (10). Another misplaced comma! Cunning is the anagram flag for PLAN PETROL. The answer is “propellant”.

I have come across a few examples where words are misused with reference to rivers.

Banker. Not someone who banks, or perhaps invests money in something, but the name of a river, in the sense that it has banks! Mean, this one:

Continental banker extremely rich individual (5). The definition is “continental banker” meaning a river in Europe. For “individual” use ONE. Extremely is letter manipulation, so use the extreme or outer letters of “rich”. RH. The answer is the river “Rhone”.

Flower. Here’s another one to confuse you. It is not asking for a type of plant, but a river, in the sense it flows.

1] Plants are reportedly in flower (5). The definition word is “Plants”. Reportedly is the homonym flag  for “are”, which sounds like R. The flower is a river, which in this case is the River Tees. Put R in TEES. The answer is “Trees”.

2] Flower bringing maiden inside wood (6).  Use the usual abbreviation for maiden, M. But it doesn’t go inside “wood” as that is the definition word. The cryptic is flower bringing M inside. The association of flowers and maidens is misleading. You are looking for a river (that flows). Try the River TIBER. The answer is “timber”.

Runner. Not someone who runs, or even a vegetable like a runner bean, but a river (which runs). The setter wants you to give the name of a river.

Mix up of nouns and verbs

Beware of the obvious. A frequent sneaky ploy is to make you think you need a synonym for a noun, when in fact you need a synonym for a verb. For example, in “kids” they are not talking of tiny tots, or children (noun); but the verb, to jest, or joke around. Another is “humour”. The clue is not meaning a joke or a comedy (noun); but the verb, to humour, or to patronise. In another the setter uses “Best” as a noun. But it turns out you need a verb, meaning to beat or to top. “Target” as a verb would mean to target, or to aim at. Instead you may realise the clue is intending to mean “to end”, or “to bring about”, as in the aim of the task. With “tramp” one assumes a noun is needed such as vagrant, or beggar. You scratch your head and almost give up because nothing seems to make sense. Instead, you need to be looking for a verb. So “tramp” here does not mean a beggar, but the verb “to traipse about”.

1] Exposes tips holding needle (9). This clue makes you initially think of a needle point, or a syringe, for example. You’d be wrong! “Needle” is not a noun here, but a verb meaning  to anger. So use the words ENDS for “tips”, with the word ANGER. The definition word, of course is “exposes”. So the anagram ENDSANGER gives the answer as “endangers”.

2] Absolutely great in play (7). Use TALL for great. The word “play” here is not a noun, but a verb, to toy. So use TOY to get the anagram TALLTOY. Answer is “totally”.

3] Couples coming from Dorset in urge to head west (6). The couples (noun) are coming from Dorset. But the quizmaster is asking for a verb! From is a lurker flag in this clue: dorSET IN Urge. As this is an across clue “head west” means you need to reverse the words SET IN U. So the answer for couples (a verb) is “unites”.

Substitution is another keyword that can take you on a bit of a trail. In the clue, “yen for nothing that is typical”, you substitute Y(en) for O (as in nothing) in the word “typical”. So the answer is “topical”.

This came up in another clue with the opposite answer:

1] Current yen for nothing to be expected (7). For current, that is, what is on at the moment, use the word topical. Substitute Y for nothing (O). And the answer is “typical”.

And a couple more:

3] Shed yet to receive power for tool’s lead (5). For “yet”, use STILL. Use P for power and T for tool (lead, or first letter). Still is to receive the P instead of the T. The answer is “spill”.

Some cryptic clues are hard to categorise because they are absolute (no, I’m not going to say it!) mind-twisters.

Try these for size:

1] Six balls wife initially hooked with wood in golf mind-boggling (12). So we want another word for mind-boggling, the definition word.

“Six balls” is an over in cricket, which provides OVER.

For “wife initially hooked” use the initial letters W and H (the clue should really have been “wife hooked initially”.

“with wood” use ELM.

For “in golf” use IN and the letter G for the NATO call sign for Golf.

The answer is “overwhelming”. Phew!

And here is another tricky customer: