Bridge is an easy game to learn and play. But it is a challenging game to play well, relying on an armoury of bidding conventions. The game is accessible to all regardless of their skill levels. Unsurprisingly it is probably the widest played card game in the world. 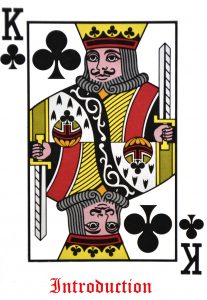 Bridge is a member of the whist family of card games where players compete for tricks. Whist dates back to the early Sixteenth Century and a card game called “Trump”. This later evolved to “Ruff and Honours”. The basic principles of these ancient games are thriving well in the modern game of Contract Bridge, where you will still come across the terms, “honours”, “ruff”, and “trump”.

No one is really sure where the name “Bridge” itself came from. It certainly has nothing to do with those structures across rivers or ravines. The most popular idea is that it derived from a Russian card game called “Biritch”, that through phonetic evolution it found its way to the more familiar, easily pronounceable word in the English language.

The first iteration of the game was Bridge Whist, played from around the 1890s. It introduced the ‘No Trump’ bid, the exposed dummy, and the selection of the suit by the dealer or his partner. Up till then the trump suit was determined by turning up the last card of the deal. The next development was Auction Bridge where all four players could bid to name the trump suit. Finally (probably 1930 or thereabouts) Contract Bridge came into its own. This final version changed the scoring so that overtricks could not count towards game. And it introduced penalties for failing to make the contract. You could win the most tricks but still lose the game! This made success heavily dependent, not so much on the cards held, but on the bidding before play.

Here are a few definitions to be getting on with:

A Practical Guide to Playing Bridge refers to the Acol system of Contract Bridge as played in the United Kingdom.

This guide is about the basic principles of playing Contract Bridge, incorporating the generally accepted bidding conventions of Acol. This is probably the most common Bridge bidding system in use in Britain today. It was devised by a Bridge club in Acol Road, Kilburn, London during the 1930s, and popularised by Iain Macleod in his book “Bridge is an Easy Game“, published in 1952. The title says it all. The game is easy to learn and easy to play.

The underlying principle of the Acol system is to keep the bidding as natural and as flexible as possible. Novice players can do well enough using relatively few conventions (conventions will be explained later). An experienced player once explained to me that Acol was a “forgiving” system; that is, you can sometimes make a mistake in your bidding, and still manage to recover the situation somewhat and hopefully end up in the right contract.

The rules of bidding, play, scoring and general etiquette are a common standard globally. It is only in the use of bidding systems that the game may vary. There must be over a hundred bidding systems in Contract Bridge, with Acol and Goren (as practiced in America) being the two most well-known. The two systems are fairly similar. Goren has evolved into the so-called “Standard American” system. In your travels you may occasionally come across others such as Baron, Blue Club, CAB, Culbertson, Precision, Schenken and many more besides.

When players gather for a game they must declare the system they use for bidding and explain its principles. If there is a bid you do not understand, or suspect you are misinterpreting, you have a right to ask bidder’s partner what he understands by the bid. If you plan to join a bridge club you may want to check the system they use before your final decision. In the UK the Acol system is very common — thank goodness!

In this guide I have endeavoured to create a consistent and logical framework with specific point counts wherever possible. This may be a little inflexible, but it is the best way to learn the basic principles of using the point count to assess the strength of your hand in terms of honours held and card distribution.

Rules are meant to be broken, of course, and in Bridge this is no exception. It is a tactical game worthy of lifelong study: when to break those rules; how to make subjective reassessments of borderline cases; whether the risks outweigh the penalties; how and when to compromise or choose between two or more valid options. There maybe 13 tricks in a game of Bridge, but there are many more tricks up your sleeve, which you can learn and use to negotiate the subtleties of the game and develop winning strategies.